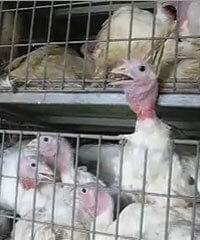 During an undercover investigation at a Butterball slaughterhouse in Ozark, Arkansas, PETA investigators documented that Butterball workers punched and stomped on live turkeys, slammed them against walls, and worse.

One Butterball employee stomped on a bird’s head until her skull exploded, another swung a turkey against a metal handrail so hard that her backbone popped out, and another was seen inserting his finger into a turkey’s vagina.

One worker told an investigator, “If you jump on their stomachs right, they’ll pop … or their insides will come out of their [rectums],” and other Butterball workers frequently bragged about kicking and tormenting birds. Read more in the investigators’ log notes.

PETA’s investigators discovered these horrors between April and July 2006 during an undercover investigation at a Butterball plant that slaughters approximately 50,000 birds each day.

Why Does This Abuse Happen?

Butterball turkeys are killed using a process that involves hanging live birds by their legs, shocking them in electrified water so that they become paralyzed (though they still feel pain), slitting their throats, and then running them through a tank of scalding-hot water for defeathering.

Because Butterball’s current slaughter method gives workers access to live birds, the animals often suffer when desensitized workers become frustrated or bored, as was the case at this Butterball plant and the other plants that PETA has investigated.

Even though they constitute more than 98 percent of the land animals eaten in the United States, birds are excluded from coverage under the only federal law designed to protect animals during slaughter, the Humane Methods of Slaughter Act (HMSA).

Go vegan today! Not eating animals is the best way to help them. Order a copy of PETA’s Vegan Starter Kit, which is full of recipes as well as health and shopping information.

What Happens if You Don’t Go Vegan?