Around the world, prolonged heatwaves and droughts have extended seasonal wildfire periods—it’s clear that climate change is intensifying wildfires, forcing people to evacuate their homes and putting their lives at risk. And the death tolls of these catastrophic events don’t stop at humans. Billions of other animals die in them, and their deaths mostly go unreported.

A leading cause of climate change is animal agriculture, so you can actually blame using animals for food and clothing for exacerbating the wildfires—and in many cases, for starting them, too. Many ranchers burn land to clear space for raising and feeding animals to be killed for food or skinned for leather, which leads to droughts, greenhouse-gas emissions, and deforestation, all of which contribute to global warming. So the deadly fires are often started for animal agriculture and are then prevented from stopping because of it.

Don’t be fooled by an industry that profits from cruelty—wool hurts sheep AND the planet.

That’s probably a huge reason why the U.N. has stated that meat consumption must decrease by as much as 90% in order for us to avoid the most catastrophic effects of climate change. Or else we can expect more of this:

California’s more than 650 wildfires in 2020 have burned through at least 1.2 million acres of land as of August—that’s four times the size of all the wildfires that occurred in the state in 2019 combined. These fires have claimed at least seven humans and an unreported and inconceivable number of foxes, rabbits, deer, frogs, mice, coyotes, and other animals who were smoked out of their homes and burned alive. Wildfires are nothing new to California, the country’s largest dairy producer, which confined over 1.7 million cows exploited for their milk as of 2019. It’s no secret that clearing land in the name of animal agriculture makes fires more likely to start, and the hot and dry climate on the West Coast sure doesn’t help.

It’s estimated that over 1 billion animals were killed in Australia’s late-2019 fires. This is about the same number of land animals (like pigs and cows) slaughtered every few days so that humans can eat their flesh. The news of charred koala bears was devastating to most people, and many caring folks went into their own pockets to help support relief efforts. Yet many of those same people show no compassion for the animals they pay to have killed for their meals. How can they donate to save one species while paying to have another tortured and slaughtered? This major disconnect is exactly what’s causing cows, pigs, chickens, and beloved koalas bears alike to suffer. 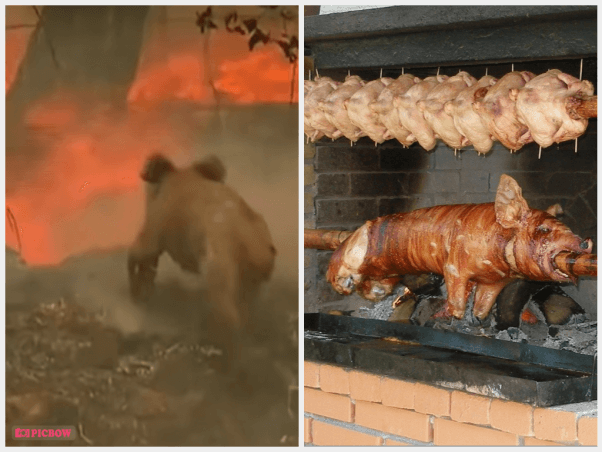 Wildfires in the Brazilian Amazon

About 41,000 fires in the Brazilian Amazon from January to August 2019 were recorded by scientists, with more than 9,500 new fires in less than one week that summer, the majority clustered inside the Amazonian basin. Cattle ranchers are known to start illegal wildfires deliberately in order to make room for more animals, and experts have reason to believe that they started the roaring blazes in Brazil. Three football fields’ worth of the Brazilian Amazon are destroyed every minute, and humans’ appetite for beef is largely to blame. The World Bank reported that cattle ranching has fueled up to 91% of deforestation since 1970.

In 2009, Greenpeace published “Slaughtering the Amazon,” a report concluding that the demand for leather was fueling the destruction of the Amazon in its own right, not just as a byproduct of beef. It’s all connected: Brazilian beef companies were supplying leather to leading global fashion brands and retailers. Brazil is filled to the brim with cows, specifically the Nelore breed, an Indian import. From 1993 to 2013, the Brazilian herd grew to more than 60 million cows. Brazil exported $1.4 billion in leather products in 2018 and most of it went to China, Italy, and the U.S., according to the Center for the Brazilian Tanning Industry.

The cattle sector in the Amazon, the world’s most important forest carbon store, is the single largest driver of global deforestation. Experts say that deforestation is the root cause of the increase in forest fires in Brazil.

The Amazon Rainforest supplies Earth with 20% of oxygen and is thought to be home to 30% of all species. And yet this beautiful place is being destroyed by a fire that has lasted 20+ days the smoke alone can be seen from Space .#AmazonRainforest #PrayForTheAmazon pic.twitter.com/LCmALQOVOF

In 2019, nearly 2 million acres of Bolivia’s vital Chiquitano forest burned down in a five-day span largely caused by animal agriculture. According to reports, Bolivia’s fires were likely started deliberately in order to clear land for farming but quickly became uncontrollable. Such practices aren’t uncommon. Not only do these fires cause massive deforestation, displace countless indigenous peoples, and contribute to climate change, they’re also responsible for the deaths of many animals. According to experts, at least 500 species were put at risk because of Bolivia’s flames. The Chiquitano dry forest is home to jaguars, giant armadillos, tapirs, and other wildlife.

Thread on the current fires in #Bolivia:

Fires have been used to expand agro-cattle area before, but our current catastrophe stems from the government authorizing further fires on FOREST lands in a new alliance with private sectors who wanted these lands.https://t.co/lfS7btxcNW pic.twitter.com/Ho4AuFm1xZ

Roughly 260 million acres of U.S. forests have been cleared in order to create cropland to feed animals raised for food. By clearing forest, we eliminate the trees that would have absorbed the rising levels of carbon dioxide and supplied us with oxygen. Do you like breathing and not burning in a fire? Then we suggest you go vegan. 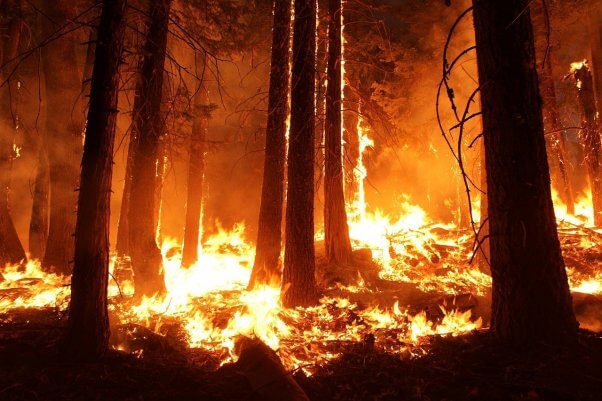 Animal agriculture requires massive amounts of land, feed, energy, and water and causes billions of sentient beings to endure a lifetime of cramped, filthy conditions on farms, industry-standard mutilations, and forced impregnations. Then, they’re sent by the truckload to the slaughterhouse, where they’re shackled upside down and their throats are slit before they’re hoisted—bleeding and screaming—across the kill floor, usually to be dumped into a scalding-hot tank of water, often while they’re still conscious. 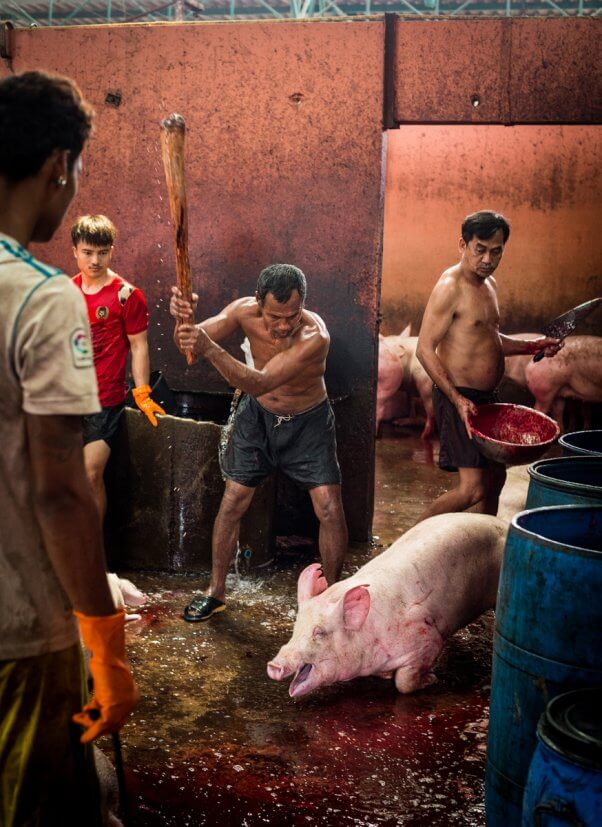 You Can Help Prevent Wildfires

If everyone went vegan, global farmland use could be reduced by more than 75%—an area equivalent to Australia, China, the European Union, and the U.S. combined—and still feed the entire world, all while sparing billions of animals every year horrific suffering and a needless death. An in-depth report from The New York Times found that even the most environmentally harmful way of eating vegan is still better for the planet than the most carbon-saving omnivore diet. Going vegan is the single biggest solution to the destruction that humans are causing our planet.

Eating and wearing vegan require zero government interference or promises from corporations. All you have to do is leave animal-derived items out of your kitchen and closet. So what’ll it be: switching from animal flesh to vegetable protein and from skin to plant-based leather—or having a planet that can’t support life? Those are your only two options. Choose wisely! 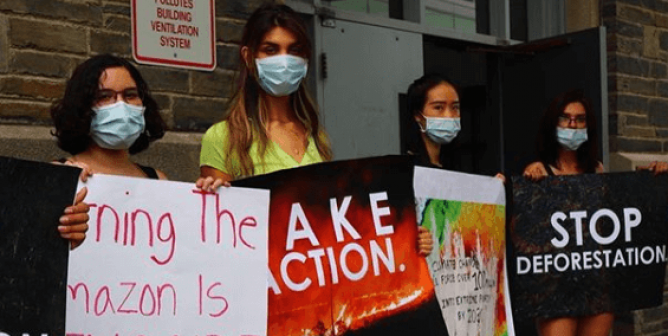 Will the Entire Amazon Rainforest Be Destroyed Because of Meat? 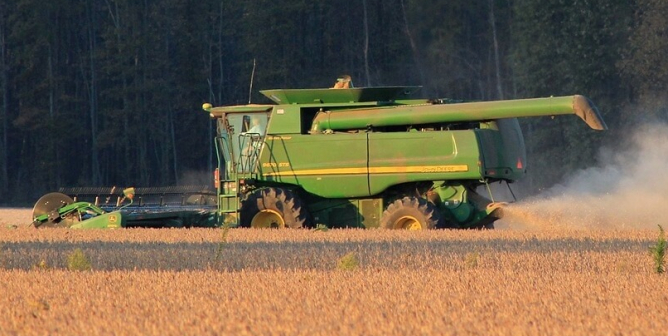 The Amazon Rainforest: The ‘Problem’ With Soybeans Isn’t What You Think 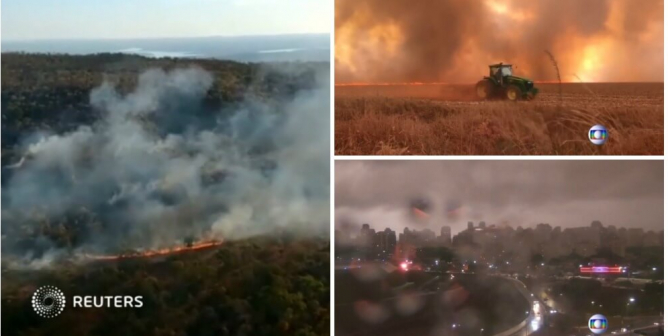 Is the Meat Industry Fueling the Record-Breaking Amazon Rainforest Fires?