It seems like every other week, climate experts describe in new detail how royally forked we on this ever-warming planet are. This time, the sobering news comes from a recent United Nations global-emissions report that found that countries are failing miserably at cutting carbon levels, which is required to avoid the worst outcomes of climate change.

According to the report, beginning with 2020, global greenhouse-gas emissions must fall by 7.6% each year. We’re nowhere near meeting this goal, and the report’s authors noted that the findings were indeed “bleak,” given humanity’s track record of never significantly reducing greenhouse gases.

We’re running out of time. We’ve knocked this planet off its foundation, and now we’re going to have to deal with the big blows of climate change.

Meaningful action starts today. As such, everyone must stop eating animal-derived foods—right now. You know it, we know it, and the experts know it. Going vegan is the easiest way to lower your carbon footprint. Read on to learn more.

The new climate change report from the United Nations (UN) has been released. And it seems to be saying what we hear in every new warning from leading climate change scientists: What we choose to eat can either exacerbate or help solve the climate crisis.

Land is a critical resource – we rely on it for food, water, health and wellbeing – but it is already under growing human pressure. #ClimateChange is adding to these pressures. #SRCCL #IPCC #GlobalGoals

In this latest high-level report commissioned by the UN’s Intergovernmental Panel on Climate Change (IPCC), a group of over 100 scientists states that any drastic efforts to cut greenhouse-gas emissions will all but fail unless we address land use issues and our fixation on eating animals.

Just like numerous previous reports, this one says that a society-wide switch to plant-based eating is our ticket out of this climate mess. The agency also makes a policy recommendation to reduce meat consumption.

And as usual, despite the overwhelming evidence that eating animals is destroying the planet and killing us, scientists and media outlets failed to say one simple phrase: “Go vegan!”

Why are scientists so afraid to urge people to stop eating meat?

They have no problem suggesting that we stop using plastic bags, stop driving gas-guzzling cars, and recycle. What gives? Maybe they’re hesitant because it would mean that they would have to stop eating meat themselves.

Many of us feel relatively powerless when facing mass extinctions, rising sea levels, and record-breaking forest fire seasons, but we actually have a great deal of power to change things if we harness it.

Every vegan on Earth is proof that culture can change and a healthier, more compassionate world is possible. There are enough of us who know that right now, we face the biggest environmental challenge in modern history. We may not be able to put a stop to the fossil-fuel industry or give up our cars completely, but each and every one of us can go vegan right here, right now.

Do the math. Meat is destroying our planet! #MathICanUnderstand pic.twitter.com/ipDMlipnib

If we’re serious about combating climate change, we must dismantle animal agriculture, which accounts for more greenhouse-gas emissions than all those from planes, trucks, ships, and cars combined. An in-depth report from The New York Times found that even the most environmentally harmful way of eating vegan is still better for the planet than the most carbon-saving omnivore diet.

The new IPCC report warns that the climate goals of the Paris Agreement could fall short unless we address land use issues and deforestation. Global land use for farms could be reduced by more than 75%—an area equivalent to the U.S., China, the European Union, and Australia combined—and still feed the entire world if everyone went vegan. This sort of change won’t come from any industry or government body—it will happen only when we all stop eating animals.

We can do this. We still have time to make this right. But if we can’t bring ourselves to do the one thing that could stop climate change in its tracks, we’ve already lost the fight. 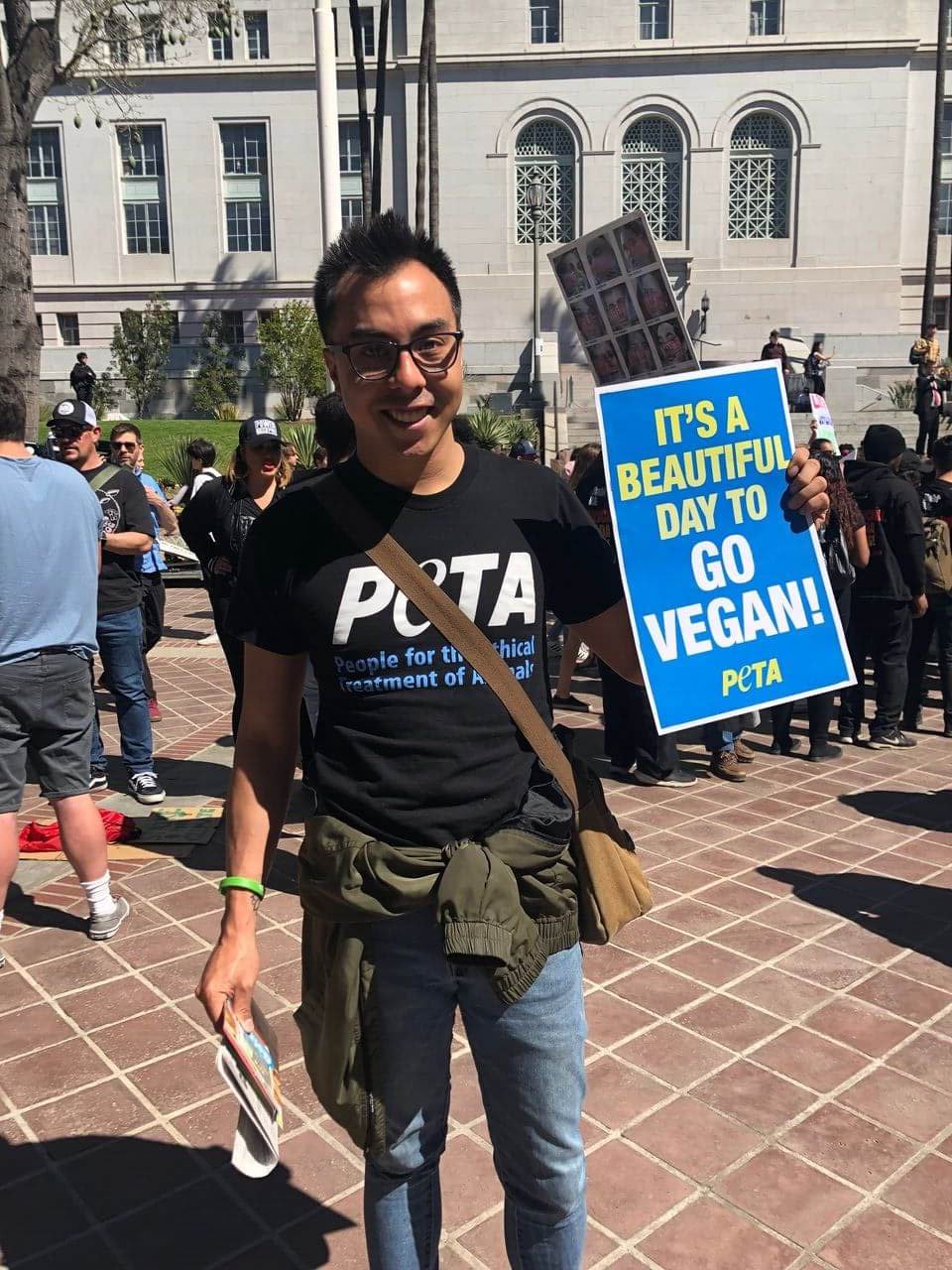 Say it loud and say it proud when you sport the PETA logo T-shirt!

The best time to go vegan was yesterday. The next-best time is right now.

The UN has stated that meat consumption must decrease by as much as 90% in order for us to avoid the most catastrophic effects of climate change. That can happen only if everyone takes action. Reduce your contribution to climate change by going vegan today. Go even further by persuading a friend or loved one to do the same!