The Florida roadside zoo released a video that claims to show before and after footage of tiger cub Ariel first suffering from “severe head tilt and near blindness,” then swimming freely thanks to “acupuncture and water therapy.” Dade City’s Wild Things is still soliciting donations for Ariel’s continued care and eye surgery. But tiger experts say that the stripe patterns on the cubs in the before and after clips are different and that given the severity of Ariel’s neurological symptoms, it is medically impossible that the “cured” swimming tiger is her. They say that the video actually shows two different cubs. 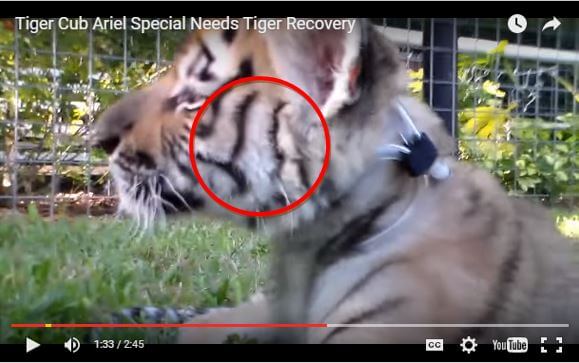 Before: Ariel has two parallel stripes on the left side of her face. 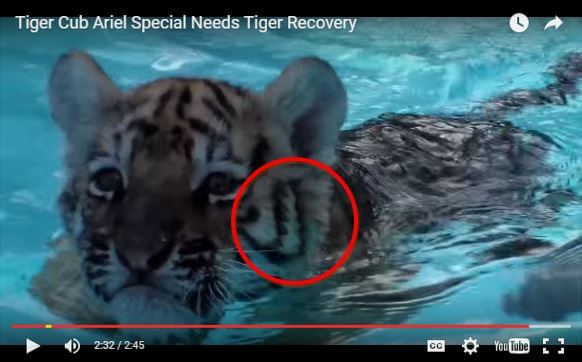 After: The two stripes are connected, proving this tiger is not Ariel.

In light of this apparent violation of laws prohibiting consumer fraud and unlawful solicitation, PETA has filed a complaint with the Florida Department of Agriculture and Consumer Services—which could lead to a third-degree felony charge and additional civil liability against the facility.

And that’s not all: Dade City’s Wild Things also appears to be violating Florida law by allowing its director, Kathy Stearns, to solicit contributions—even though she was barred from doing so for 10 years after she pleaded no contest to a crime involving theft in 2011.

Skirting the law seems to be business as usual for Dade City’s Wild Things. The roadside zoo has repeatedly made apparently fraudulent and misleading solicitations, including asking for help to get out of debt when it was not in debt as well as stating that donations are tax-deductible—even though the IRS revoked the zoo’s tax-exempt status. Not surprisingly, it has been subjected to numerous enforcement actions because of violations of Florida’s Solicitation of Contributions Act.

These issues are only the tip of the iceberg of Dade City’s Wild Things’ legal woes. PETA also notified the inhumane facility of its intent to sue under the Endangered Species Act for harming and harassing tigers and recently filed another complaint after Dade City’s Wild Things allegedly illegally transferred a tiger cub to an unlicensed individual in Texas. That cub was eventually found roaming at large. The U.S. Department of Agriculture also has a lawsuit pending against the zoo that alleges numerous violations of the federal Animal Welfare Act.

Because of Dade City’s Wild Things’ pervasive abuse of animals and flagrant disregard for the law, PETA is calling on Florida authorities both to revoke its license to solicit charitable contributions and to pursue civil penalties and criminal prosecution.

Push for the release of tigers imprisoned at roadside zoos.