PETA rescue workers discovered these two injured turtles beside local roads. Although they were mortally wounded, both turtles were still alive and suffering immensely when we found them. They were quickly and mercifully put out of their misery. 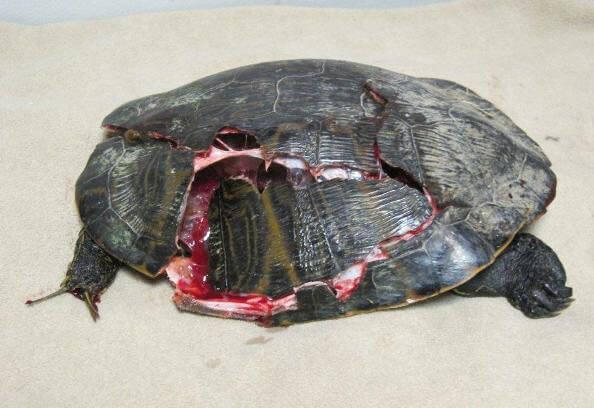 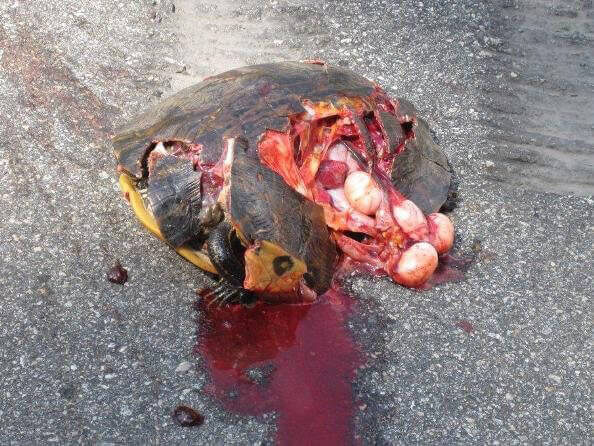 As the weather warms up, turtles are becoming increasingly mobile. If you see a turtle attempting to cross a road, lend a hand.

Turtles in danger of being struck by a car (but who are uninjured) should be helped across the road. Pick them up by grasping them firmly by both sides of the body, in front of their hind legs. Be careful not to drop them! Large snapping turtles have long necks and can bite hard, so instead of picking them up, gently push them from behind to safety with a blunt object. Don’t use anything sharp that could cause injury.

Remember, when you see turtles in the road or about to cross the road, always keep them moving in the same direction that they were headed. Do not try to make them change course, as they have a destination in mind and will simply try to cross the road again if placed back where they started from. Once they’re safe on the other side, leave them alone. Don’t relocate turtles to new areas, even if you think their current location is odd (unless it is obviously hazardous, such as a busy parking lot). Moving them to an unfamiliar location can subject them to foreign diseases and parasites that they lack a natural immunity to, so that should be avoided.

If you see a turtle who has been hit by a car, take the animal to a veterinarian or an animal shelter to be assessed and, if necessary, euthanized. Turtles have an extremely slow metabolism and can take days or weeks to die, even when they are severely injured.