Victory! The United States District Court for the Southern District of Indiana has granted PETA’s request for a preliminary injunction—an extraordinary form of relief that’s issued when a court finds that irreparable injury will result without it—against Tim and Melisa Stark and their roadside zoo, Wildlife in Need. The order immediately stops the Starks and the facility from carrying out declawing amputations on big cats, separating cubs from their mothers, and holding its “Tiger Baby Playtime” events, which subject cubs to hours of direct contact with the public, pending the trial in PETA’s Endangered Species Act (ESA) suit.

You can learn more about PETA’s lawsuit and the treatment of tiger and lion cubs at Wildlife in Need below.

PETA’s motion for a preliminary injunction was supported by expert affidavits and testimony demonstrating that declawing irreparably injures big cats by amputating their toes at the last joint—thus wounding, harming, and harassing the protected animals in violation of the ESA—and that separating cubs from their mothers, using them repeatedly in public encounters, and handling them with excessive force and physical abuse also violate the prohibition against harassment.

The U.S. Department of Agriculture (USDA) has repeatedly cited Tim Stark for abusive handling of cubs, even suspending his federal Animal Welfare Act license at least twice. Additionally, a USDA inspection in March 2017 found that at least 20 exotic cats had been declawed at Wildlife in Need. The court ruling found that declawing contributed to the deaths of two big-cat cubs. Additionally, PETA’s evidence showed that half the big-cat cubs born or acquired in 2017 for use in the “Tiger Baby Playtime” events had died.

The court has done the right thing in stopping Wildlife in Need from tearing cubs away from their mothers for use as public playthings and from amputating their toes, which can leave them with lifelong lameness, pain, and psychological distress. PETA—and compassionate people everywhere—looks forward to seeing the Starks permanently forbidden from mutilating, exploiting, and profiting off baby animals.

Update: Tearing tiger and lion cubs away from their mothers, amputating their toes at the final joint, and tormenting them during “Tiger Baby Playtime” events: This is the reality for tiger and lion cubs imprisoned at Wildlife in Need, a roadside zoo in Charlestown, Indiana.

PETA has filed a lawsuit against the facility and its owners and operators Tim and Melisa Stark alleging that their mistreatment of tigers and lions violates the federal Endangered Species Act, which prohibits wounding, harming, or harassing protected animals.

A newly released U.S. Department of Agriculture inspection report reveals that two tiger cubs were still bleeding, hesitant to walk, and vocalizing in apparent pain weeks after having been declawed at Wildlife in Need. These amputations have permanently injured the big cats, leaving them with acute wounds and the risk of chronic lameness, pain, and psychological distress, as their claws are essential for species-specific behavior such as digging.

Although tiger cubs and male lion cubs stay at their mothers’ sides for up to two years in nature—and female lions remain with the pride into adulthood—the Starks tear them away from their mothers within weeks of birth. During Wildlife in Need’s public displays, tiger and lion cubs are handled roughly and dragged around for paid public encounters and photo opportunities.

For years, the Starks have demonstrated a blatant disregard for animals and the laws designed to protect them.

PETA seeks the removal of these species from Wildlife in Need in order to prevent further abuse and mistreatment of animals.

PETA has sent an official notice to Tim Stark—owner and operator of roadside zoo Wildlife in Need—warning him of our intent to sue in U.S. Federal Court under the Endangered Species Act (ESA) over his mistreatment and abuse of the tigers and lions who are kept at his facility. The ESA requires plaintiffs to inform potential defendants at least 60 days prior to taking legal action.

In our eight-page notice letter, we state that Stark has declawed tiger and lion cubs in violation of long-standing federal law. The declawing procedure leaves big cats with chronic pain and psychological distress, as their claws are essential for species-specific behavior such as digging. We also allege that Stark’s “Tiger Baby Playtime” events—in which baby wild animals who have been prematurely torn away from their mothers are passed around for public encounters and photo ops—violate federal laws protecting tigers and lions from harm, abuse, mistreatment, and harassment. 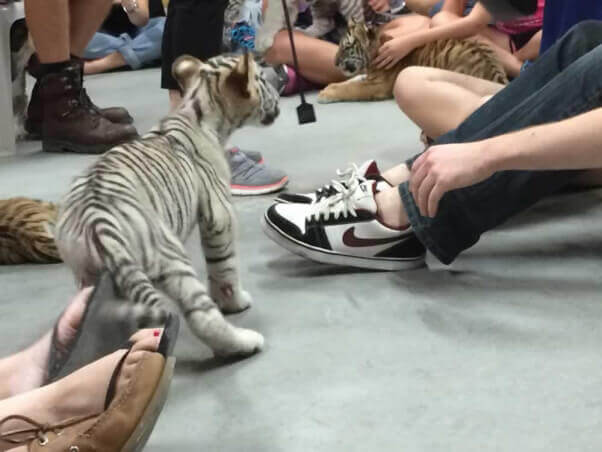 We’re challenging this facility’s systemic cruelty, which includes tormenting terrified cubs, separating infants from their mothers, and amputating their toes at the last joint, leaving them with a lifetime of physical and mental problems.

Baby tigers DON'T want to play with you.

Posted by PETA (People for the Ethical Treatment of Animals) on Friday, July 28, 2017

Stark has racked up more than 50 animal-welfare violations since 2012. A recent U.S. Department of Agriculture (USDA) inspection report notes that he has declawed at least 20 exotic felines, two of whom had “severe complications” from the surgery, and Wildlife in Need’s own veterinarian acknowledged that one cub had only a 50 percent chance of survival because of these complications. The report also indicated that Stark fabricated records in an apparent attempt to conceal the presence of the two ailing cubs, whom he attempted to hide on the property. His license to exhibit animals was suspended for 21 days following this inspection.

During a follow-up inspection, he was cited for operating while his license was suspended and for denying entry to inspectors while carrying a gun in an apparent intimidation tactic.

Conditions for animals at other roadside zoos are also grim. Many tigers at such facilities are torn away from their mothers as cubs and endure a lifetime of suffering, just for a few moments of human entertainment. Click the button below to speak up for tigers suffering at three different roadside zoos—ask these facilities to retire the animals to reputable sanctuaries: