Even though it’s known that isolation is emotionally devastating for elephants, the Natural Bridge Zoo in Virginia has kept an elephant named Asha alone for years. She spends her nights in a cold, damp barn, and when the zoo is open, she spends her days plodding in endless circles with riders on her back. A dejected Asha has been observed standing in her paddock and rocking back and forth—a well-recognized sign of profound deprivation and “zoochosis,” a mental disease caused by intense confinement.

PETA has asked the USDA to send in an elephant expert after a recent broadcast by a local news station showed a reporter who was allowed to approach this powerful, multi-ton animal freely. And in the pen where Asha was kept, standing water was visible on the concrete floor and feces were piled several feet high against the wall. Several primates who were confined to barren cages were also being held in the barn. The Natural Bridge Zoo is a chronic violator of federal animal-protection laws and is currently under investigation by the U.S. Department of Agriculture (USDA).

The PETA Foundation’s Captive Animal Law Enforcement (CALE) division has sent a letter to the USDA urging the agency to have its elephant expert assess Asha’s living conditions. 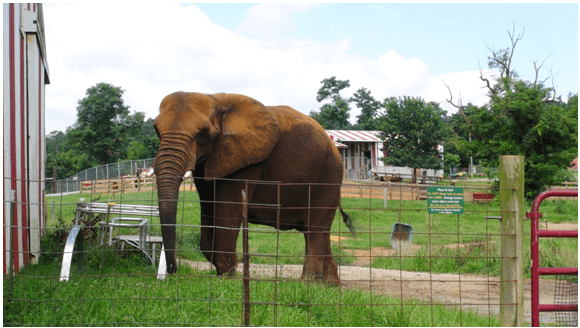 CALE also took action for other animals in need:

The swaying of confined elephants like Lucky … is extremely disturbing because it is so symptomatic of a life of social and physical deprivation. With nowhere to go and no one to see, no new smells to investigate and nothing to strive for elephants become bored and frustrated. The result? They stand in one place rocking, back and forth slowly losing their minds.

The comments that the USDA received with regard to improving living conditions for bears were overwhelmingly in favor of it. Please keep the pressure on the agency to protect these animals!