The word “born,” however, doesn’t really describe what happened. More accurately, Pee Wee was produced, like a product, purpose-bred to suffer from canine muscular dystrophy (MD). He would exist only as long as he was useful to Joe Kornegay, who headed the canine MD laboratories at the University of North Carolina–Chapel Hill and, two years later, at Texas A&M University.

Pee Wee would endure increasing pain every day of his life as the disease steadily ravaged his body to the point of debilitation. After 11 excruciating years, he would die in a cold, metal kennel, just as he had lived—alone.

Canine MD is a progressive disease, meaning it gets worse by the day. Each day of Pee Wee’s life was more difficult than the one before. When he was 7, experimenters saw that Pee Wee’s muscle atrophy had gotten worse. When he was 8, his appetite took a nosedive. Numerous notations in documents that span years indicate that Pee Wee did not eat properly—leaving some or all of his food. He needed chiropractic adjustments and medication to alleviate joint pain. Despite those treatments, records show that Pee Wee had significant difficulty standing or walking by the time he was 11 years old. Staff also found that he had lost even more muscle mass—including in his jaw area and thighs—and he suffered from abnormal heart rhythm because canine MD spares no muscle from attack.

By February 2022, canine MD’s takeover of Pee Wee’s body was nearly complete. Records show that he was unable to stand on February 14, 15, or 16. Pee Wee needed the help of standing aids to get him off the cage floor and leg braces during the infrequent times he was allowed to exercise.

On March 13 and 21, records indicate that staff found Pee Wee “quiet”—a term that generally suggests he was in severe pain. He refused meals for days on end and lost 6% of his bodyweight in just 11 days. By March 21, he was refusing all treats, had to be helped to rise, and was slow to move. There was vomit in his cage. He stood for one minute and lay down again. All this should have finally compelled experimenters to release Pee Wee from his suffering—but they had no such decency.

Pee Wee was found dead in his kennel on the morning of March 26.

After learning of Pee Wee’s suffering, PETA submitted three separate complaints to the U.S. Department of Agriculture (USDA). One, on November 11, 2019, stated:

Multiple notations in his records, extending as far back as January 2019 indicate that he was not eating all of his food. … Although we have only received records to September 10, 2019, we are concerned that if Pee Wee is still alive, he is likely suffering considerable pain and distress beyond that which would be considered “necessary” for the purposes of any experimentation.

But the USDA sat on our complaint for more than two years. When the agency finally did check on Pee Wee on November 29, 2021, it found nothing wrong—despite evidence that Pee Wee was clearly circling the drain.

Pee Wee’s life was as tragic and sad as it was emblematic of the lives of innumerable dogs in the Texas A&M MD laboratory—all of whom endured unimaginable pain and died for absolutely nothing. In more than 40 years of inflicting a lifetime of suffering on dogs like Pee Wee, no cure or treatment to reverse the symptoms of MD in humans has been found. 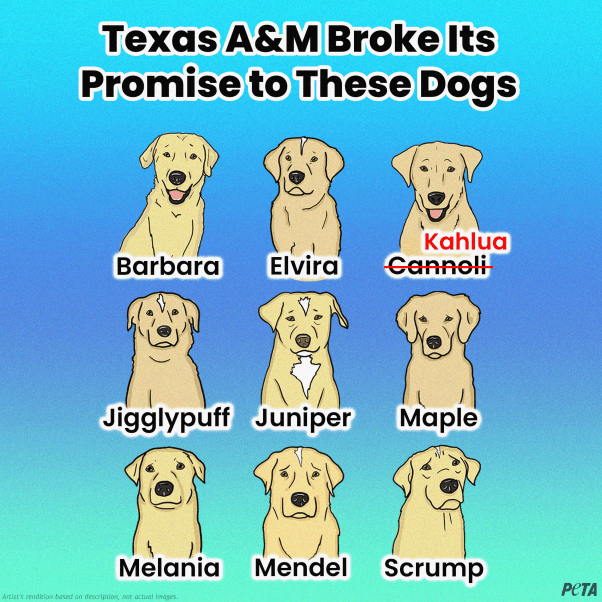 Enough is enough. Please join PETA in calling on Texas A&M to adopt out the nine healthy dogs from this lab who were betrayed and transferred to the veterinary school, despite the promise to release them: