If King Kong should ever decide to scale the Space Needle, he’s in luck. A new PETA ad features the Seattle landmark topped with a heaping bowl of veggie pasta—complete with a King-Kong–size fork—and urges Seattlites to improve their health by eating like a gorilla. 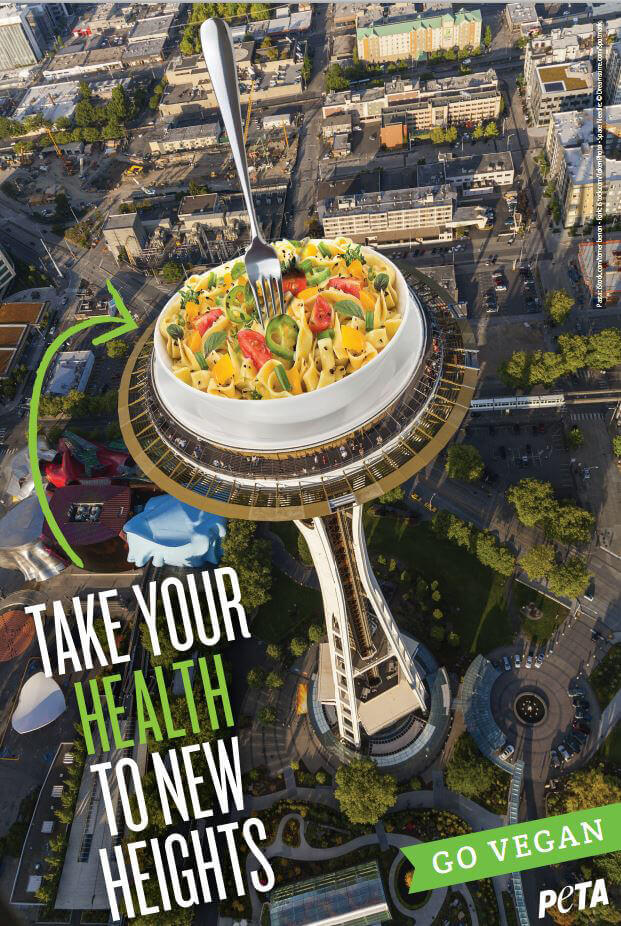 PETA hopes to place the ad in the Space Needle’s elevators, and we’re also asking that vegan options be added to the tower’s rotating SkyCity Restaurant.

Why should Emerald City residents and visitors eat green? According to the Academy of Nutrition and Dietetics, vegetarians are less prone to heart disease, strokes, diabetes, and other diseases than their meat-eating counterparts. Going vegan could also ease the load on the Space Needle’s famous 10-miles-per-hour elevators: On average, vegans are 18 percent thinner than meat-eaters are. And shedding pounds can also help slash cancer risk, according to a recent study.

A lot has changed since the Space Needle was built for the 1962 World’s Fair. Today, more than 30 million Americans opt for plant-based foods, and vegan meals are available everywhere from The Cheesecake Factory to Taco Bell. Ready to embrace the foods of the future? Check out PETA’s new Vegan Starter Kit (and don’t forget to order some copies for your friends).