Heeeeey, yoooou guuuys! I’m starting a new segment of The PETA Files, aptly called “Corey, How We Love Thee,” where entries will be dedicated to the wonderfulness that is Corey Feldman. OK, so it isn’t really going to be titled “Corey, How We Love Thee,” and there isn’t even going to be a section devoted entirely to the master actor, musician, and activist. I may have slightly exaggerated.

But it is true that here at PETA, we love the actor known for his smart-mouthed roles in the 1980s and, better yet, his huge heart for animals! Not only did he star in classics like The Goonies, Stand by Me, The Lost Boys, and The ‘burbs, now he and gorgeous wife and Playboy model Susie are also starring in PETA’s new “Give Peas a Chance” ad, encouraging everyone to go vegetarian. 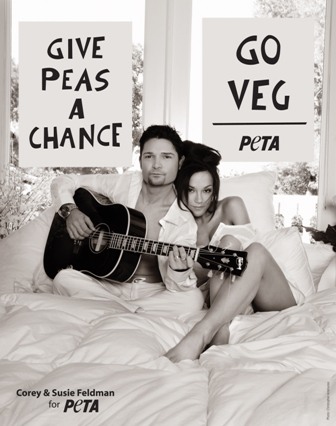 Quite the stunner, isn’t it? If you’re thinking the ad looks familiar, you’d be right. It’s based on the iconic “Give Peace a Chance” image of John Lennon and Yoko Ono. You can’t get more rock ‘n’ roll than that.

Here’s what Corey had to say:

Susie and I choose the vegetarian way of life because for us, there really is no other choice. We must evolve as a race and as a planet, and evolution includes learning and changing from our mistakes. We will never truly grow until we as a whole come to the realization that all beings on this Earth should be treated with love and respect.

The Feldmans have been doing good stuff for animals for a long time. Ask KFC campaigner Nicole Matthews, who has been to their home for some chitchat of the animal activist kind. The whole thing unfolded in an episode of last season’s The Two Coreys—a reality show that is actually devoted to him. It was quite the riveting hour of television.

Still, though, I have to say that my favorite Corey Feldman masterpiece (and possibly the greatest movie of all time) is hands down The Goonies! What’s yours? Comment below to let us know!

And while his treasure-chasing, vampire-hunting, neighborhood-spying days are over, there are lots of animals to be saved, and we love working with Corey on our side!