Earlier today, PETA supporters dressed in blood red and holding signs reading, “Bulls Die a Bloody Death in Pamplona” and “Running of the Bulls Ends in Death,” demonstrated next to Wall Street’s famous “Charging Bull” statue to protest Americans’ participation in Spain’s cruel Running of the Bulls, in which dozens of terrified bulls are stampeded, slipping and sliding down narrow streets, only to die by being stabbed to death in the bullring. To drive home their message, the protesters placed a “bloody” cape beside the bull statue, put “tears” under its eyes, and stuck banderillas to its body. 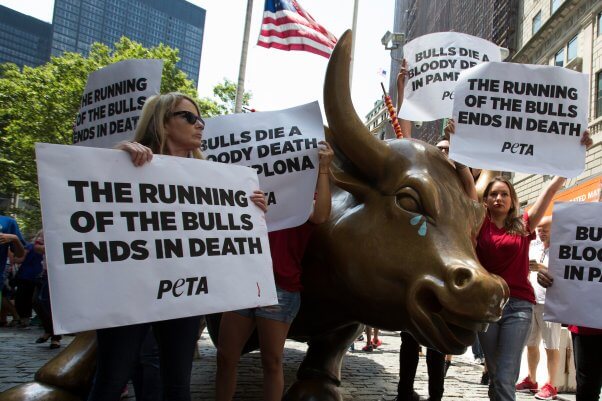 Each bull terrorized in the streets of Pamplona, Spain, experiences an excruciatingly painful death in the bullring after being chased by drunken people. PETA urges American tourists not to support this horrific violence, which the vast majority of Spaniards now condemn. 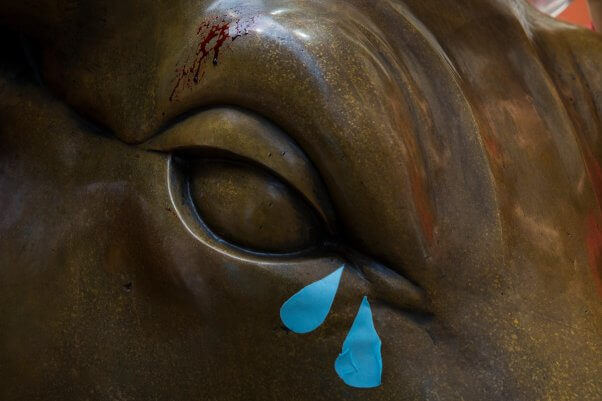 Bullfighting has been outlawed in 100 Spanish cities and is kept alive by the tourist industry. In a typical bullfight, as many as eight men taunt, beat, and stab a single bull with daggers and harpoon-like banderillas until he becomes weakened from blood loss and can’t lift his head because of the severed muscles in his neck. The matador then stabs the exhausted animal with a sword, and an executioner cuts his spinal cord. Many bulls are paralyzed but still conscious as they’re chained and dragged out of the arena.

It’s imperative that the Pamplona City Council protect the safety of both residents and visitors. Banning all future bullfighting and bull-running events would go a long way toward doing that.

Click the button below to take a stand against the violence occurring on the streets of Pamplona. Urge the city’s mayor to ban the Running of the Bulls.