PETA has obtained damning video footage from a U.S. Department of Agriculture (USDA) inspection of Adam Burck — a scofflaw exhibitor and big-cat supplier to circuses such as Jordan World Circus — revealing tigers kept in crates so small that the animals barely have room to turn around as they pace back and forth, likely out of distress and agitation. The footage shows a yellow liquid covering the floor of a crate holding an elderly, underweight tiger named Shere Khan and another tiger named Isis drinking dirty liquid off the floor and reacting with disgust. Watch the video now:

According to the USDA’s accompanying report, Burck neglected to provide the thin, aging tiger with adequate veterinary care and kept tigers inside the stinking, poorly ventilated barn—which hit 92 degrees during the inspector’s visit. With Burck, the tigers spent most of their lives in these cages and were held in them for over a year when not being used in performances. The report also notes that the barn in which Burck kept the tigers lacked a perimeter fence and posed a “constant, ongoing potential threat” to public safety. 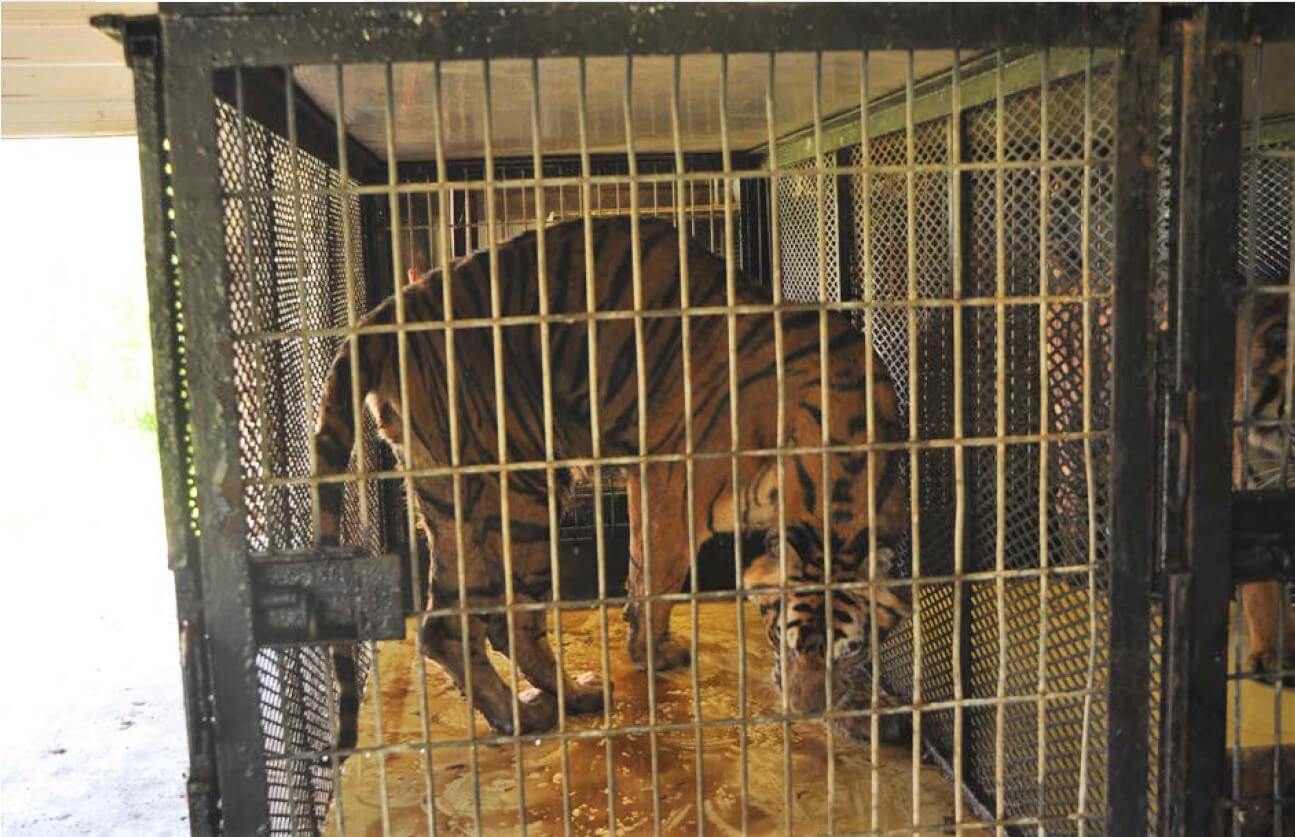 Shortly after that inspection, the USDA slapped Burck with an official warning, informing him that future violations could result in additional enforcement actions. Two weeks later, the agency cited him again for keeping tigers in travel crates most of the time.

After citing and warning Adam Burck, the USDA canceled his exhibitor’s license.

Despite this cancellation, PETA received video footage of Burck illegally exhibiting tigers at the Hadi Shrine Circus in Evansville, Indiana, last week. We rushed a complaint to local authorities, who confirmed that his unlicensed tiger act was removed from subsequent performances.

In December 2021, a woman filed a lawsuit in Oklahoma’s Choctaw County District Court, alleging that she had been mauled by a tiger on January 6, 2020, at Adam Burck’s home. The lawsuit seeks more than $75,000 in damages.

Where Are They Now?

Burck’s tigers have apparently been renamed and transferred to Ryan Easley, a former circus exhibitor who operates and forces tigers to perform at Growler Pines Tiger Preserve.

To an audience, an animal circus is a passing distraction. But for the tigers forced to perform against their will, every day is a living hell. Burck isn’t a lone bad apple—the suffering of tigers is business as usual in traveling circus shows.