Shocking video footage captured on February 29 in Central Park shows the moment when a horse—a 12-year-old mare named Aisha who spent her life being forced to pull heavy carriages full of tourists—collapsed. She never got back up. As is the case with many horses who break down under the physical and mental stress of being used for outdated forms of human entertainment, she was euthanized. Watch the heartbreaking footage below:

This carriage horse from Clinton Park Stables is seen stumbling and unable to straighten their back legs in Central Park earlier today.

After years of doing nothing for carriage horses, will @NYCCouncil finally protect them? cc: @CoreyinNYC pic.twitter.com/EzSgvxoCkb

Sadly, further footage shows that Aisha’s suffering continued even after she collapsed. One video appears to show carriage-industry workers blowing smoke into her face, causing her to flip over in terror. People on the scene allege that eventually, workers tied her up and dragged her onto a trailer. Reportedly, no veterinarian was on site.

‼️ TRAGIC: Carriage horse who collapsed today is DEAD! He already looks half dead here being dragged in trailer. Join our PROTEST Sunday at 1pm at 618 West 52 St stable. Wear all black. This is a funeral protest. Carriage drivers have blood on their hands! https://t.co/Rlm7jJAqpm pic.twitter.com/oEz2J7wM19

After news of her death broke, PETA members joined the local nonprofit animal rights organization NYCLASS (New Yorkers for Clean, Livable, and Safe Streets) and over 150 other concerned New Yorkers for a bold protest of the city’s cruel horse-drawn carriage industry. Participates of the “die-in,” which was meant to evoke a funeral, were encouraged to wear black. They dropped to the ground simultaneously, and their bodies littered Central Park to call to mind the countless horses, like Aisha, who have died there. See it in the video below:

Other conscientious people gathered in protest in front of stables used by the carriage industry on 52nd Street in Manhattan. 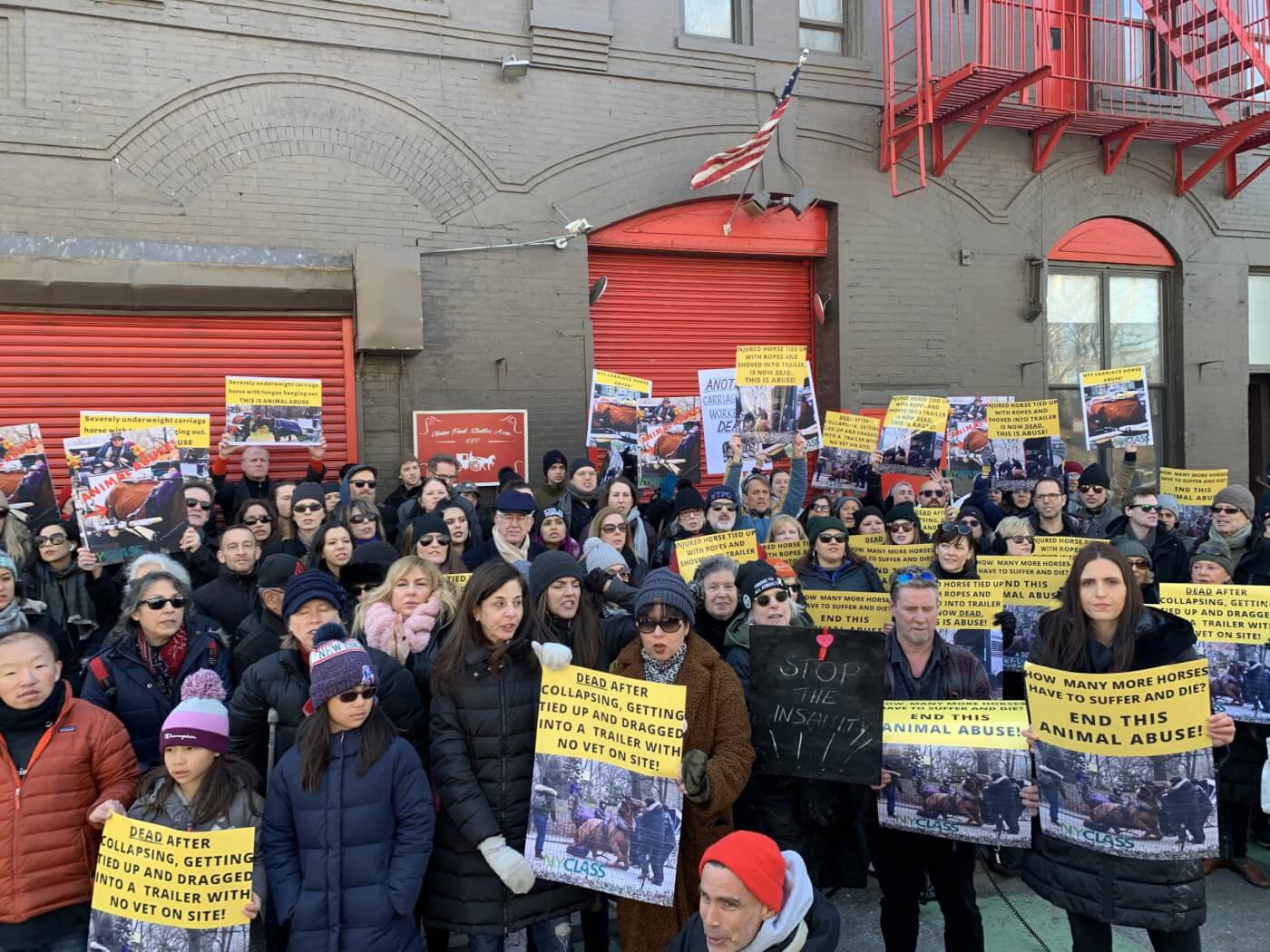 The incident was so tragic and word of it spread so quickly on social media that it even caught the attention of Mayor Bill de Blasio. He tweeted that New York Police Department’s Animal Cruelty Investigation Squad was already working on the case.

The video of a horse collapsing and dying in Central Park yesterday is painful and says so much about a persistent problem.

We’ve made real progress in animal welfare but we must go further. The NYPD’s Animal Cruelty Investigation Squad is on the case and WILL get answers.

Horses are gentle and intelligent animals. They’ve shown that they can understand symbols and use them to make requests of humans. Some horses in Finland, for example, have learned to tap one symbol when they’d like to have a winter coat put on and another symbol when they’d like to have it taken off. But right now, horses are suffering when used for tawdry human thrills, including carriage rides.

If you’re a tourist and you find yourself needing transportation in an unfamiliar city, choose a human-powered pedicab, rent a bike from a bike-share service, or simply walk. A carriage ride may be a fleeting moment of entertainment for you, but it supports a lifetime of torment and forced labor for horses.

If you live in New York City, please look up and contact your city council member. Explain that horses will continue to suffer as long as they’re being used in this cruel and dangerous industry and that as a constituent, you want them to put an end to this abuse by banning horse-drawn carriages in the city. If you live elsewhere, you can contact Mayor de Blasio directly to ask him to take action for horses.