Add another country to the list! Brazil joins Canada, the European Union, Japan, South Korea, and the United States in saying no to a pesticide test in which dogs are repeatedly poisoned over the course of a year and then killed. The government made the decision after hearing from PETA, pesticide companies, and others who’ve shared a wealth of information showing that this experiment is unethical and unscientific.

Following a PETA appeal, South Korea has joined Japan, Canada, the European Union, and the United States in stopping routine pesticide tests in which dogs were repeatedly poisoned over the course of a year and then killed. We’ll continue working to end all testing on animals worldwide.

After hearing from PETA scientists for the past three years, the Japanese government officially announced this week that it is saying “sayonara” to a gruesome poisoning test conducted on dogs.

Imagine being locked in a cage and forced to eat pesticide-laced food or breathe pesticide fumes for a year until you are killed and your body is dissected. That is exactly what dogs undergo in a common test. But now, after receiving documentation from PETA scientists of extensive analyses conducted by experts demonstrating that data from the one-year dog poisoning test are not used to protect humans, the Japanese Ministry of Agriculture, Forestry and Fisheries has decided to stop requiring the use of this test. 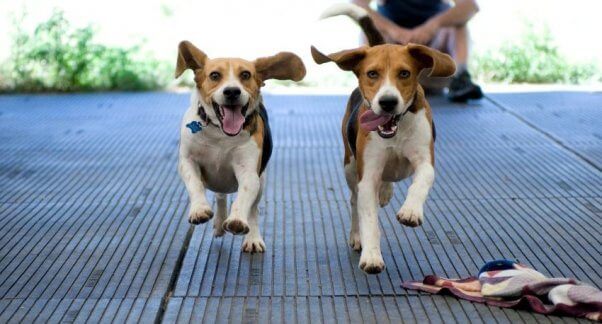 With the assistance of the Japan Anti-Vivisection Association, our scientists pointed out that numerous governments, including those of the European Union, the U.S., and Canada, have eliminated this test from their pesticide registration requirements after discussions with PETA, sparing thousands of dogs annually. Japan now joins the growing list of countries that have made the right decision for dogs and for science.

PETA scientists are also in contact with regulatory agencies in other parts of the world to encourage them to follow suit and are working to end all pesticide testing on dogs and all other animals. Your help will bring us closer to a world in which all animals are regarded as individuals, not laboratory tools, and in which we’ll look back on chemical tests on living, breathing beings as part of a painful, dark past.

ACT NOW FOR DOGS BEING TORMENTED IN U.S. LABORATORIES
Help Us Save More Animals