Update: When the plan to hire a Russian cargo jet to take the Toronto Zoo’s three elephants to a Performing Animal Welfare Society sanctuary didn’t work out, the Royal Canadian Air Force stepped up. Now, as soon as Defence Minister Peter Mackay gives the thumbs-up, Toka, Thika, and Iringa will be flying high courtesy of a C-17 transport aircraft and a military endeavour dubbed “Operation Dumbo Drop.”

The following was originally published on November 29, 2012:

It could be only a matter of days until the Toronto Zoo’s three captive elephants, Toka, Thika, and Iringa, let the frozen Canadian ground fade into the distance as they set off for their new home: the Performing Animal Welfare Society (PAWS) sanctuary in sunny California. After a long campaign by Zoocheck Canada, PETA members, and the compassionate members of the Toronto City Council, the trio will trade their zoo enclosure for acres of varied natural terrain, lakes to bathe in, heated barns, and even therapeutic whirlpool baths. Although the elephants’ tale has a storybook ending, their journey to freedom certainly wasn’t without conflict. 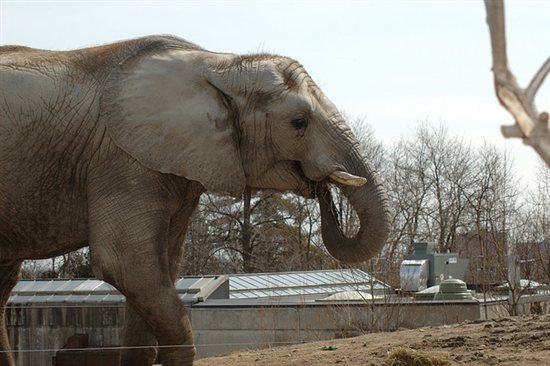 When the Toronto Zoo, under pressure from Bob Barker, Zoocheck Canada, and PETA, initially agreed to release its captive elephants, it was determined to simply ship them to another decrepit zoo. But the Toronto City Council sided with animal advocates and voted for the gentle giants to be retired to PAWS instead.

Then it seemed as though one of the elephants’ foot ailments might make the 40-hour drive too dangerous. So animal advocate extraordinaire Bob Barker stepped up and provided the trio with their own “Elephant Force One” of sorts, a private plane that will quickly whisk them to their new home. The Toronto Zoo then raised concerns about the potential for tuberculosis at PAWS, but an independent infectious-disease report determined that the facility was safe. Once again, the Toronto City Council voted, and once again, it resoundingly insisted that the elephants be sent to PAWS immediately.

A Tale of Two Cities

The Toronto City Council also said in its final motion on Toka, Thika, and Iringa that it feels that Edmonton, Alberta’s, Valley Zoo should allow the zoo’s lonely elephant, Lucy, to retire to PAWS as well. Because elephants are ill-equipped to tolerate frigid weather, Lucy is forced to spend the winter months confined to a small barn. Our lawsuit to free Lucy did not succeed despite the wonderful comments of one judge who felt Lucy should be free but who could not persuade the other judges on the panel. Lucy hasn’t had the company of any other elephant in four long years. But Zoocheck Canada and PETA are determined to win her freedom, and Bob Barker is advocating for her with all his might.

Please join us in asking Edmonton officials to give Lucy the peaceful retirement that she so deserves.