Fish without fishing? It’s true. Food innovators are making vegan fish that doesn’t cost lives. Using seaweed and nutrients from the ocean, they’re creating plant-based shrimp and cultured fish—that is, growing fish flesh from in vitro cells instead of slaughtering animals for it. Cultured seafood can spare millions of fish and other animals the agony of fishing. Plus, it’s better for bodies of water all around the world.

PETA’s decades-long efforts to spare fish and other sea life have included introducing vegan seafood to millions. Our eye-catching demonstrations, like the one with this hooked topless mermaid, brought media attention to the cruelty of the fishing industry. Join the effort to save our oceans—go vegan today! The delights below are nice to sea life and the planet. 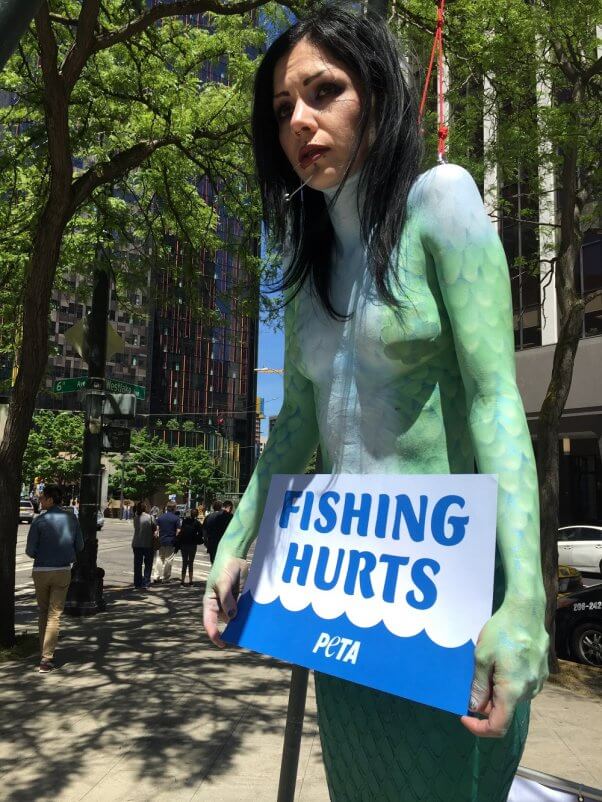 This Shellfish Doesn’t Come From the Sea

Shiok Meats is the first of its kind in Southeast Asia. This Singaporean company is reinventing shellfish by making cell-based shrimp, lobster, and crab. Cofounder Dr. Sandhya Sriram describes her clean meat as shiok, or “delicious” in Malaysian slang.

Shiok Meats uses only sustainable, plant-based ingredients to feed shrimp cells, creating its own blend with nutrients that are similar to those found in the ocean. Craving one of this company’s crustaceans? Only a year to go! Shiok Meats enters the market in 2022.

Plant-Based Shrimp Is Free of Suffering

New Wave Foods created plant-based shrimp to spare animals the agony of being yanked out of their home. Shrimp, turtles, and dolphins are also often caught in fishing nets and killed as “bycatch.” Bycatch is responsible for immeasurable suffering and death and is a significant threat to threatened populations.

Company cofounder Michelle Wolf is seeking to end this pointless slaughter by offering vegan seafood. She aims to promote healthy eating with tasty shrimp, made with sustainably sourced seaweed and natural flavors. Her passion for ocean conservation even nabbed her a spot on Forbes’ 30 Under 30 list in 2020. If you’re in food service, you can order the sustainable shrimp here. Otherwise, it launches in restaurants later this year.

Seafood Without the Suffering

Unlike Shiok Meats and New Wave Foods, the shellfish industry is awash with cruelty. PETA’s undercover exposé revealed that live lobsters and crabs were torn apart limb from limb at Linda Bean’s Maine Lobster. This shocking footage—along with PETA protests and nearly 76,000 e-mails from our supporters—ended in a victory: Linda Bean sold the facility that PETA had investigated and closed down many lobster roll eateries. Her lobster slaughterhouse was later closed when the new owners couldn’t persuade people to work there.

Another PETA investigation exposed live-animal eating at restaurants in Los Angeles. Chefs cut off the tails of shrimp and plated them right next to their moving bodies, leaving diners to bite into their flesh. Other chefs cut off the sensitive limbs of a live octopus with a butcher knife and served them squirming on a plate. PETA is calling on lawmakers to introduce legislation that prohibits animals from being served alive. And we’re calling on you to choose only vegan seafood.

Ocean entrepreneur Beth Zotter and her team at Trophic LLC are creating plant-based protein from red seaweed, which has a high protein content and a remarkable umami flavor. Its “red-meat like attributes” are perfectly fit for vegan products—dulse, a little-known species of red seaweed, tastes like bacon when fried. 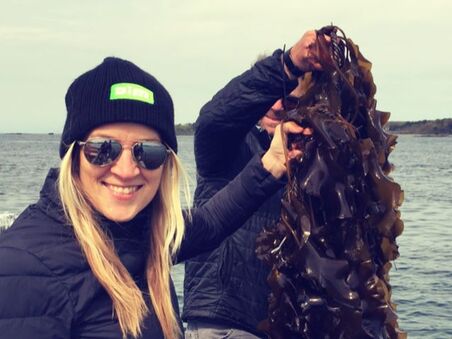 Zotter is engineering high-tech sea farms that could drastically lower the cost of seaweed farming in the near future. In her words, seaweed can “feed the world.” She’s spot-on—seaweed is capable of producing five times as much protein per acre as soybeans, which is no small feat. Trophic is still in the development phase, so stay tuned!

Vegan Fish Saves Those in the Sea

Fish can feel pain. Scientists who study pain are in complete agreement that their pain response is basically identical to that of mammals and birds. These individuals love to play games, and some can even recognize themselves in a mirror. You can save sea life by always choosing vegan fish and seafood—check out some of our favorites below.