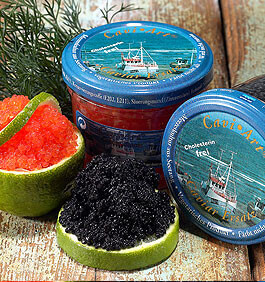 Russian President Vladimir Putin will be ringing in the new year in high style after receiving PETA’s gift of caviar … of the vegan variety.

Russia has historically been one of the world’s largest suppliers of caviar, but the industry has decimated the Caspian Sea’s beluga sturgeon population and left Russia turning to Vietnamese aquaculture farms to satisfy its citizens’ hunger for caviar. So PETA is rushing a case of mouth-watering vegan Cavi-Art to Putin with a note pointing out that as a once-prominent exporter of caviar, Russia could protect decimated sturgeon populations and bolster its faltering economy by producing plant-based—and therefore sustainable—versions of the delicacy.

Industrialized aquaculture farms are often filthy, crowded enclosures in which fish are condemned to swimming through their own waste and can suffer from rampant parasites and diseases. Female sturgeon, who feel pain and fear as all animals do, are often disemboweled while they are still alive so that the eggs can be ripped from their ovaries.

Putin ended his country’s seal slaughter in 2009, calling it “a bloody industry that should have been banned long ago,” and then banned the importation of all harp-seal products from Canada. PETA is also asking Putin—in addition to protecting sturgeon and the Russian economy—to prohibit the capture of orcas in Russian waters and to work with marine-mammal experts to rehabilitate and release the orcas who were caught and held captive in recent years.

Let’s hope Putin is as compassionate to these marine animals as he was to seals.