Update: PETA has now confirmed that the USDA has not one but two open investigations into AWA violations by the Hawthorn Corporation: one prompted by PETA’s complaint regarding Hawthorn’s use of Lance Ramos (see below) to unlawfully exhibit tigers in violation of the USDA’s revocation of Ramos’ license and the other arising from a separate case in Florida. Please urge the agency to follow the lead of governments around the world in defending animals against abuse by circuses and exhibitors by permanently revoking Hawthorn’s license.

PETA has submitted a request to the U.S. Department of Agriculture (USDA) asking the agency to revoke the Animal Welfare Act (AWA) license for the notorious Hawthorn Corporation, which the agency has inexplicably repeatedly renewed despite years of flagrant AWA violations against elephants and tigers as well as the illegal exhibitions that Hawthorn still allows. 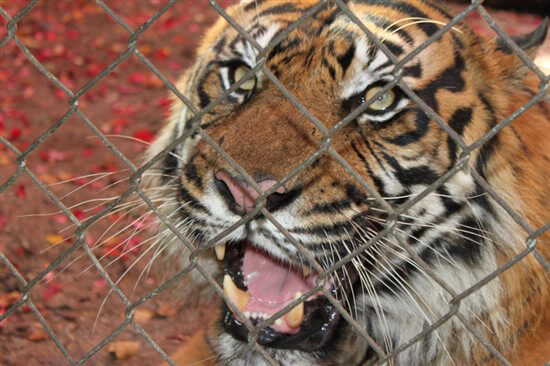 A History of Horrors

As PETA has learned from years of working to free animals from Hawthorn’s cruel clutches, calling Hawthorn “notorious” is actually putting it rather mildly. The exotic-animal exhibitor’s reprehensible history of AWA violations include USDA citations issued on more than 60 occasions for Hawthorn’s many failures to provide animals with proper veterinary care, nutrition, safe or sanitary enclosures, safe or humane handling practices, exercise, and adequate space. 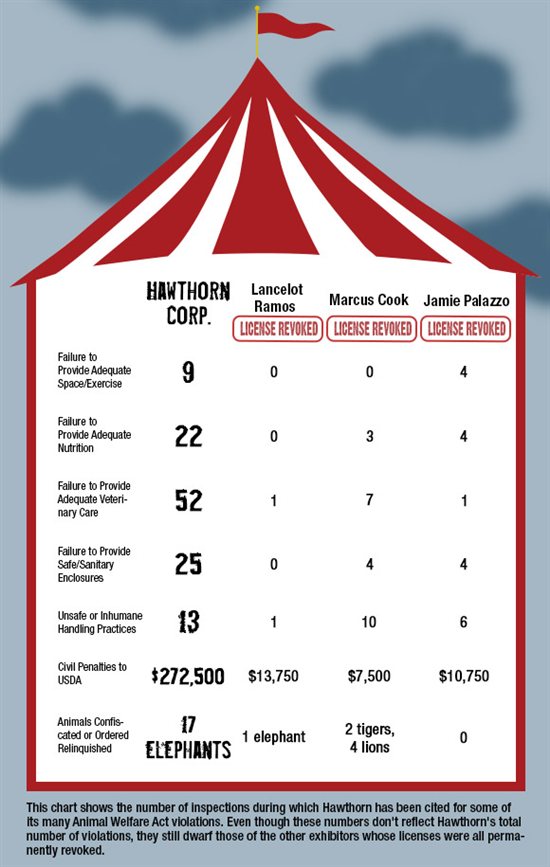 The USDA’s previous enforcement actions against Hawthorn have entailed multiple license suspensions, more than a quarter of a million dollars in penalties, and confiscation or ordered surrender of at least 17 exotic animals. None of these actions have done anything to ensure even adequate treatment of the animals Hawthorn forces to perform.

The USDA has recognized that continuing to fail to adhere to minimum standards of sanitation and feeding—both of which are chronic problems for Hawthorn—are violations for which an AWA license should be revoked. Yet the USDA appears to be granting Hawthorn preferential treatment by repeatedly renewing its license.

Someone whose license was permanently revoked is animal trainer Lance Ramos (aka “Lancelot Kollman”) after AWA citations for, among other cruelty, using physical abuse as a “training tool” on exotic cats to the point that at least one of them died and denying adequate veterinary care to an elephant so severely emaciated that he was a full ton underweight when the USDA confiscated him. Despite this, Hawthorn brought Ramos on board to train and exhibit tigers, and PETA has provided evidence to the USDA that he recently illegally exhibited the big cats with a Shrine circus and Showfolks Circus.

Every day that Hawthorn remains licensed is a day that animals are suffering. Please send a polite e-mail to USDA General Counsel Ramona Romero urging the agency to revoke Hawthorn’s license immediately and permanently disqualify its employees and agents from obtaining a USDA license.