Indie video game Untitled Goose Game has taken the world by storm—both serious gamers and amateurs alike (myself included) have become obsessed with it, and it’s all about geese’s perspective. Here at PETA, we’re such big fans of it that we’re awarding House House (the creator) a Hero to Geese Award. 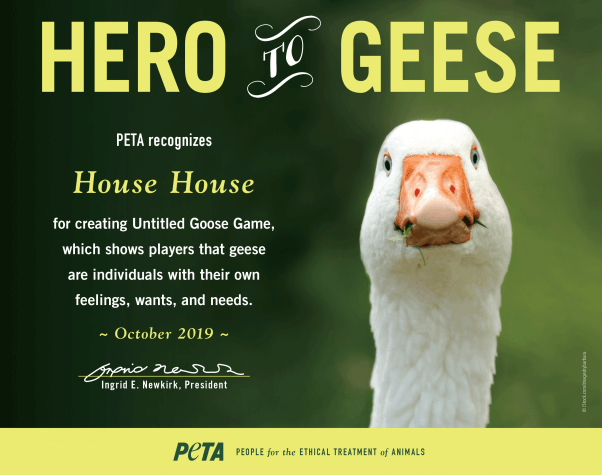 Even though geese are just trying to live in peace (and have been around for about 10 million years longer than we humans have, by the way), humans often consider them a nuisance. But Untitled Goose Game rightly flips this narrative on its head. From the first moment of the game—when you, playing as a goose, are in a wooded area littered with junk and garbage—it’s apparent that humans are the ones who, long ago, invaded the land of geese.

Each level of the game has a to-do list, but you can accomplish your tasks in any order—or you can completely ignore the tasks in favor of harvesting carrots, rearranging items in a shop, or repeatedly locking the angry shopkeeper in the garage. Essentially, the game gives geese what they’ve deserved all along: their freedom.

Aside from topping gaming charts and earning awards, Untitled Goose Game has triggered a few interesting theories about who the main character really is and where he comes from. One of our favorites is from Eater, which posits that the game takes place in a town where the main industry is foie gras production and the goose must seek revenge.

We have our own proposal for the next version of the game: Untitled Canada Goose Game. It could show what happens to real geese used for Canada Goose jackets. A few folks on Twitter have already pondered what Untitled Goose Game would be like as a Canada Goose spinoff—but we already know the answer: violent and terrifying, obviously.

The goose from Untitled Goose Game may be amusingly “horrible” (according to the game’s description—and would you be happy if your friends and family were constantly disturbed or killed and made into coats and pâté?), but real geese are bright and loyal individuals. They mate for life and are protective of their partners and offspring. Did you know geese often refuse to leave the side of a sick or injured mate or chick, even if winter is approaching and the others in the group are flying south?

Geese don’t deserve to be bothered, killed for food, or plucked for their soft down feathers. They, like all animals, deserve to be left in peace.

We must have empathy for these animals who share our cities and towns. That’s why we love Untitled Goose Game—and House House for creating it. The game has sparked important conversations about animals, plus we get to try out life as a goose—we’re not surprised, really, that the unnamed goose has made such an impression.

What to Do After You’ve Won Untitled Goose Game

Relax—you’ve finished all your tasks. Well, almost all. There’s still one left: Help real geese! Click below to speak up for them.

Never Eat Foie Gras or Any Other Animal-Derived Foods