Vulnerable animals continue to suffer at the University of Wisconsin–Madison as a culture of disregard for animal welfare continues to prevail in the school’s laboratories. PETA has obtained a trove of federal records that pull back the curtain on unchecked misery and an absolute lack of accountability for clear violations of animal welfare laws.

During the five-month period from January 2021 to May 2021, UW-Madison violated federal animal welfare regulations and guidelines no fewer than 11 times. Doses of post-operative and post-procedural pain relief were never given or were delayed because of worker negligence, exacerbating the animals’ suffering. In three separate incidents, monkeys escaped from cages—often after workers failed to check locks—and sustained injuries. Experimenters blasted mice with radiation but failed to use adequate protective shielding. As a result, 10 mice were found dead from radiation poisoning and an additional mouse had to be euthanized. In multiple incidents, monkeys were administered incorrect—and usually higher—doses of experimental and other compounds, and in one case, a monkey had to be euthanized because of the mistake. A marmoset sustained a foot injury when an employee closed the pen door without noticing that the animal wasn’t fully inside the cage. The injury required veterinary intervention.

In 2020, UW-Madison received more than $338 million in taxpayer money from the National Institutes of Health, and half of that is estimated to fund experiments on animals. According to a Pew Research Center survey, the majority of Americans oppose the use of animals in experimentation. Even among supporters of animal experimentation, there is an expectation that laboratories will comply with the minimal animal welfare regulations and guidelines required by law. UW-Madison’s chronic and extreme violations of these regulations and guidelines represent almost unimaginable suffering for animals, a waste of taxpayer dollars, and a betrayal of public trust.

You would think that after carelessly freezing a few baby mice alive, leaving macaques for days without water, or failing to supply pain relief to multiple monkeys who’d just had surgery, you’d learn to take better care of the animals under your supervision. Alas, not so if you’re the University of Wisconsin–Madison (UW-Madison), where violations of federal animal welfare guidelines pile up like garbage in a landfill and stink just as bad.

PETA previously exposed the rotten treatment of monkeys at the university’s Wisconsin National Primate Research Center, and it’s no surprise that the conduct throughout all its animal laboratories is just as putrid. 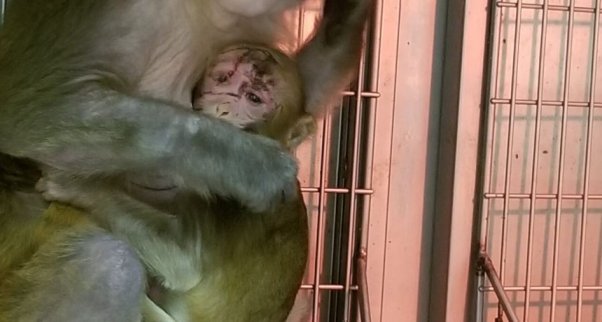 What Animals Endure in Experiments at UW-Madison

Between February 2018 and February 2021, 56 separate reports—some documenting multiple violations—were filed illustrating the astounding negligence, incompetence, and carelessness of UW-Madison experimenters. That’s a rate of one or two reports filed every month.

Workers in UW-Madison’s laboratories repeatedly failed to provide animals with even the most basic necessities. In a February 2018 incident, three baby mice starved to death and two had to be euthanized after experimenters forgot to feed them. And while laboratory workers were lounging in their lawn chairs at a Memorial Day picnic that year, three macaques didn’t receive water for the entire long weekend. At least seven additional incidents in which staff failed to provide animals with food or water have occurred since then.

In August 2020, 35 zebrafish died when a laboratory worker turned off the water flow line connected to the tank and forgot to turn it back on. In October 2020, three mice died and a fourth had to be euthanized when they were placed in a sealed chamber and the worker forgot to activate the airflow. Workers failed to supply adequate pain relief to a pig and a rhesus macaque who were used in experimental surgeries in September 2020 and January 2021, respectively.

The word “euthanasia” comes from the Greek for “good death,” but some of the animals who underwent so-called euthanasia inside UW-Madison’s barren laboratories weren’t spared suffering even in their final moments. In a 2019 incident, six newborn mice survived a botched gassing and were found alive in a freezer. The previous year, another baby mouse languished alive in a refrigerator for “approximately half an hour” after a laboratory worker failed to confirm that he or she was dead.

Staff in UW-Madison’s laboratories sometimes overlooked the same problem or error for days before anyone noticed. Nineteen days passed before someone realized that a veterinary technician was administering a joint treatment to the wrong macaque in 2018. And it wasn’t until two weeks after a macaque escaped from a testing cage and injured his or her tail that “[t]he severity of the wound was … appreciated” and the monkey was given veterinary care.

Even when multiple people were tasked with making sure animals were fed or a cage door was locked, UW-Madison couldn’t pull it off. In a 2019 incident, after not one but two staff members failed to notice an improperly locked cage, two macaques escaped and interacted with a third monkey. All three were injured and required veterinary care.

But perhaps the most shocking incident during this time period involved an adolescent marmoset whose right leg had to be amputated after he or she sustained a femur fracture “sometime before or after multiple protocol approved manipulations while conscious.” As for what led to this leg-destroying injury, oblivious experimenters at UW-Madison could only shrug their shoulders: The incident was chalked up to undetermined causes.

When animals are thought of as living test tubes whom humans are free to exploit and discard, it’s no wonder that they’re treated like trash. But what’s really trash is the belief that animals are ours to use—not to mention the so-called “science” that comes from this cruelty. UW-Madison must close its animal laboratories and switch to human-relevant, animal-free methods.

Take action now to tell animal-exploiting institutions like UW-Madison that it’s time to dump experiments on other species: