Exhausted elephants trudging painfully uphill in blistering summer heat, their feet burning and tourists on their back, are getting desperate. These American tourists were shocked when—in Jaipur, India—they saw firsthand the violence that it takes to force elephants to endure these conditions. 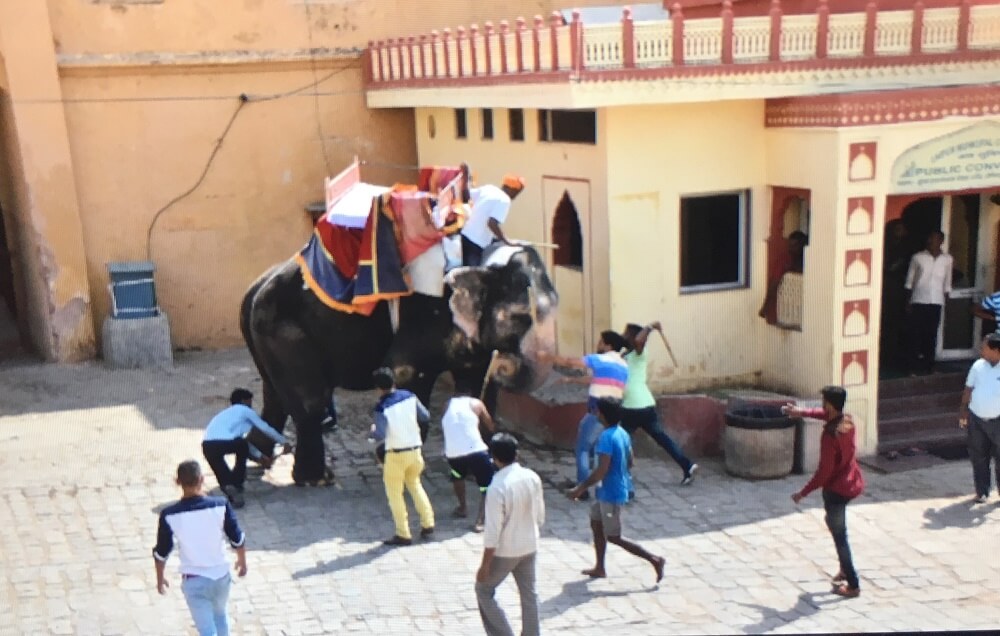 During a tour of Amber Fort, a group of American visitors witnessed two elephants trying to escape from their handlers while being made to carry tourists uphill all day in extremely high temperatures. Around eight men carrying heavy sticks and iron bullhooks arrived and struck one of the elephants over and over again for 10 minutes or so, all to force the animal to obey them out of fear and pain.

A tour guide told the disgusted and upset tourists that the elephants “act out” because of the unbearable temperatures. Just imagine how painful it is to trudge up and down hills all day in scorching heat on hot pavement!

Deeply disturbed by what they saw, the tourists began taking photos, uploaded them to social media, and wrote to PETA India asking them to take action.

People who care about elephants should never ride one.

Elephants are sensitive, thoughtful, highly intelligent, social, and curious animals. In nature, Asian elephants spend nearly all their waking hours walking, grazing, dust-bathing, swimming, and socializing with their close-knit herd members and teaching their babies how to live safely. In captivity, they’re kept chained whenever they’re not working, tied down and beaten into submission during training, and chronically overworked, forced to lug tourists on their backs, even when they’re lame, hurting, in pain, or simply exhausted.

To train baby elephants to be subservient to their handlers in the tourism industry, they’re forcibly separated from their mothers, tied down and immobilized with ropes, and beaten mercilessly, sometimes for days on end. Some elephants don’t survive these spirit-breaking sessions.

Captive elephants can break down and run amok, posing a significant danger to the public.

Many people—including children—have been killed or injured after stressed, traumatized elephants have snapped and acted out. In 2016, a Scottish man was trampled to death and his 16-year-old daughter was injured during an elephant ride in Thailand. Later that year, a woman died after an elephant picked her up with his trunk, threw her to the ground, and crushed her. These are only two of the many examples of sometimes fatal incidents involving elephants who are driven insane or can’t take their servitude and frustration any longer.

PETA India has contacted government officials to push for cruelty charges to be brought against these particularly abusers, but the best way to help ensure that elephants don’t suffer for a few fleeting moments of “entertainment” is by never participating in direct-contact activities with these animals and telling others why they shouldn’t, either. And please, demand that travel companies keep animal abuse and exploitation off their itineraries.

I Will Speak Out Against Cruel Elephant Rides!

Looking for more information on traveling compassionately? We’ve got you covered:

How Not to Be a Jerk to Animals When You Travel