Before making plans to go trekking in Nepal, please look at the video footage and photographs taken during an undercover investigation commissioned by PETA India. The footage shows how baby elephants in this South Asian tourist destination are taken from their mothers and “broken” by being chained, struck, and burned so that they can be used to give rides. 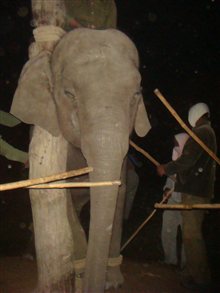 Trainers repeatedly wave flaming torches in the frightened youngsters’ faces and over their trunks, legs, and bodies. The fire singes their skin, causing painful burns and causing sparks to fly into their eyes. Heavy chains and restraints spiked with nails are used to restrict the calves’ movements, leaving abrasions and puncture wounds. Hooks are often pierced through the elephants’ sensitive ears, which riders yank on in order to steer the animals.

Bullying and tormenting elephants forced to give rides and to perform for tourists’ entertainment is pervasive throughout the world. Baby elephants in India, Thailand and even at Ringling Bros. and Barnum & Bailey Circus’s “training camp” in Florida suffer similar abuse. Trainers with Have Trunk Will Travel (HTWT),  which provides elephant rides for fairgoers in California, have been caught on tape beating elephants.

You can help by boycotting all elephant “entertainment” acts and by asking the Los Angeles County Fair and the Orange County Fair to stop supporting elephant abuse by ending their relationship with HTWT.