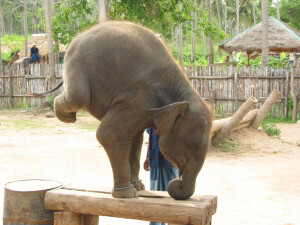 Have you visited Thailand, do you know someone who’s going there, or are you planning a trip to that country? Here’s one tourist trap that definitely belongs on the “to-don’t” list: elephant rides. A new report from the wildlife monitoring network TRAFFIC reveals that up to 81 live elephants were illegally captured for sale into the Thai tourist industry between 2011 and 2013. Most of these elephants were reportedly taken from Myanmar, where trafficking poses a serious threat to the survival of the country’s free-roaming elephant population.

According to the report, traffickers use elephants who have been beaten into submission to corral herds of free elephants into pit traps. The older members of the herd—often mothers and aunts who will desperately try to protect their babies—are reportedly often shot, and the younger, more profitable calves are taken to the Thailand-Myanmar border to be systematically “broken” by being confined inside log boxes and beaten into submission.

After being violently torn from their families and homes, these elephants are forced into a miserable existence of lugging loads of tourists on their backs every day, often through sweltering temperatures. They are routinely beaten with bullhooks—rods with sharp hooks on one end—and denied adequate food and water. Many elephants develop pressure sores and suffer from chronic problems with their sensitive feet

Tourists’ dollars fund this cruelty. Please, never visit elephant camps or take elephant rides, and urge everyone you know to stay away, too. And please speak up for other elephants who are kept in captivity, such as Mali, who is languishing in the Manila Zoo.