Two medical staffers at the Naval Hospital Jacksonville in Florida made national headlines this week after they created social media posts showing them mishandling infants in the hospital nursery. A photo showed one holding up her middle finger at an infant with the caption, “How I currently feel about these mini Satans.” A video also showed one of them moving a seated baby’s arms and torso in time to music. Public response was fast and furious, and the employees were immediately barred from direct patient care.

While the behavior was unprofessional, mean-spirited, and an abuse of power in the treatment of vulnerable beings, the infants—thankfully—weren’t physically harmed. Just as those medical staffers deserved to be removed from their positions, all animal experimenters should be finding themselves jobless right now, too. The pain, terror, and torture that helpless animals, including babies, are subjected to in laboratories make these medical personnel look as harmless as kittens. 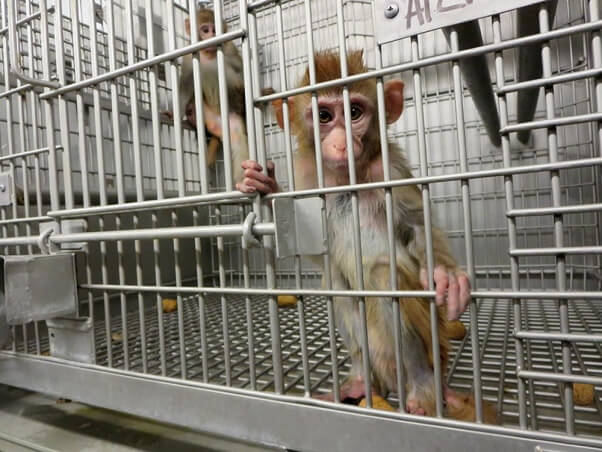 Over the years, PETA has repeatedly exposed stomach-turning physical and psychological abuse of animals in laboratories with eyewitness video footage. The film “Unnecessary Fuss,” so titled because the lead experimenter in the video commented that he would not discuss what went on in the laboratory as it would “stir up all sorts of unnecessary fuss,” was released by PETA in 1984. The footage was shot by University of Pennsylvania experimenters and shows violent head-injury experiments on baboons in the school’s laboratory, which was called “one of the best laboratories in the world” by the director of the National Institutes of Health at the time.

In the video, experimenters admit that a monkey is inadequately anesthetized but hold him down and continue cutting into his head anyway as he jerks away in pain. They restrain baboons on a table, cement their heads into metal helmets, and use a hydraulic device to thrust them forward with an acceleration of up to 1,000 units of g-force in order to inflict severe head injuries (15 units can kill a human being). The animals struggle against their restraints, showing that they are conscious during the procedure.

The video, which is staged as a “mockumentary,” shows a sedated monkey on a procedure table, as an experimenter comments, “The animal is down for a second lateral bang. That’s him waving.” The person then lifts the animal’s limp hand and waves it toward the camera. After the monkey’s brain has been damaged, experimenters inflict further damage when using hammers and screwdrivers to remove the helmets. In one scene, they struggle to remove a helmet from a monkey. As it is removed, one of them exclaims, “It’s a boy!” and then notices that a portion of the animal’s ear was torn off with the helmet. They laugh at a brain-damaged baboon who sits slumped in a chair with drool dribbling from his mouth, and one says, “Cheerleading over in the corner, we have B-10. B-10 wishes his counterpart well. As you can see, B-10 is alive. B-10 is watching and hoping for a good result.” In another scene, one comments, “You better hope the anti-vivisection people don’t get a hold of this film.” They laugh, joke, and smoke while causing living, feeling beings unimaginable pain.

It’s the same sickening abuse that PETA continues to expose in laboratories around the world. But we have made significant progress in getting experimenters charged with and convicted of cruelty to animals, getting funding cut and experiments on animals ended, seeing entire inhumane facilities shut down, and persuading companies and schools to switch to superior, high-tech, non-animal research. And we’re still at it.

Help us end more abusive experiments by urging Yale University to stop force-feeding crude oil to birds in cruel tests that have no potential benefit to humans or even to other birds.