This morning, a special birthday delivery will arrive for Texas A&M University (TAMU) President Michael Young, courtesy of PETA. It’s a heart—to replace the one that he’s failed to show so far—wrapped in paper reading, “Be Kind to Animals,” and accompanied by a card featuring a happy golden retriever. The not-so-subtle message? That Young should step up and stop TAMU’s cruel and ineffective muscular dystrophy (MD) experiments on dogs. 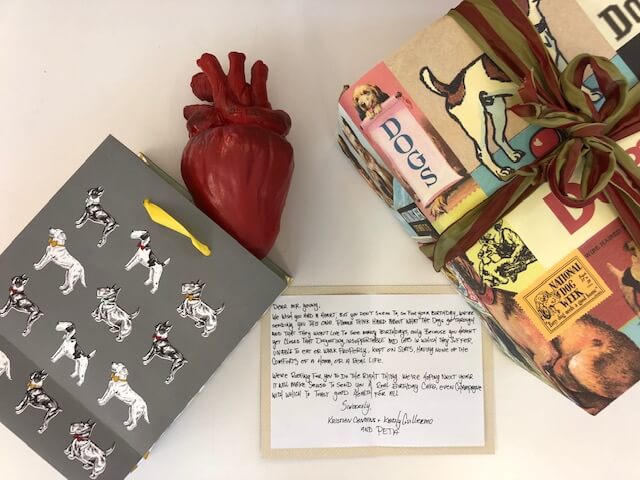 “While Michael Young celebrates another birthday, most of the dogs in TAMU’s labs won’t live to see many—or any—more birthdays and will suffer for yet another year in tests that offer no hope or help to muscular dystrophy patients like Johnathon Byrne, who recently joined the protests at the school,” says PETA Vice President of Laboratory Investigations Dr. Alka Chandna. “PETA hopes Young has a change of heart and ends these horrific experiments.”

Video footage obtained by PETA shows dogs suffering from MD who were caged, sometimes alone, in barren metal cells in TAMU’s labs. Their swollen tongues and weakened jaw muscles made it difficult for them to swallow even thin gruel, and strings of drool hung from their mouths. Those who didn’t exhibit symptoms but who carried the gene for MD were used for breeding more dogs to experiment on. The video shows these dogs frantically pacing and gnawing in frustration on the cage bars.

Canine MD isn’t the same as the human form of the disease, and 37 years of these experiments on dogs have failed to produce a cure or even a treatment for the disease in humans. Patients afflicted with MD, scientists, and public figures—including actor Lily Tomlin, Miami Dolphins quarterback and TAMU alumnus Ryan Tannehill, and commentator Bill Maher—have all spoken out against these cruel experiments.