The most talked-about play during Saturday’s football game between Texas A&M University (TAMU) and Mississippi State wasn’t made by a player—it was made by two PETA supporters who called out TAMU and its muscular dystrophy (MD) experiments on golden retrievers and other dogs, even as security dragged the protesters off the field at Davis Wade Stadium.

The activists—sporting shirts and signs proclaiming, “Texas A&M: Stop Cruel Dog Tests”—rushed the field with an important message: TAMU should free the 25 dogs suffering in its laboratory! These dogs have been bred to have a debilitating canine form of MD that leaves them struggling to walk, swallow, and even breathe. 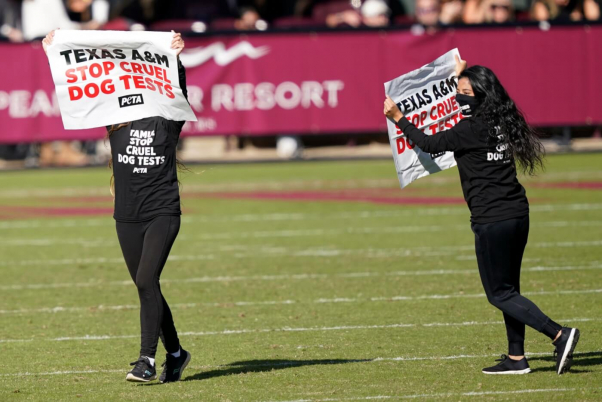 The activists were tackled and dragged away by security and charged with disorderly conduct and trespassing.

PETA and these protesters want TAMU to care about these tormented dogs as much as it does its football games—if it did, it’d release them into loving homes.

For decades, generations of dogs have suffered and died in gruesome experiments that haven’t led to a cure for MD in humans. Under pressure from PETA and our supporters, 500 physicians, and people with MD, TAMU stopped breeding dogs to develop the disease. The lead experimenter has retired, and many of the nearly 100 dogs have been adopted into homes. And following thousands of calls from PETA supporters, TAMU recently allowed three more dogs, Lucilla, Varinia, and Cheddar, to be adopted—proving that the university can release dogs from its laboratory.

ADOPTED! Thousands of PETA supporters called for the release of 9-year-old sisters Lucilla and Varinia, imprisoned in Texas A&M’s dog lab. You did it! They are now free, along with Cheddar! They’re getting a new chance at life, in real homes with families to love. Tap the link in our profile to ask @tamu to release the remaining 25 dogs in this lab: http://peta.vg/2xiq

But the school is still keeping 25 dogs—at least 12 of whom are healthy—imprisoned in its lab.

We’ve repeatedly offered to take all the dogs still imprisoned by TAMU and place them in good homes. So what’s the holdup? Together, we must demand action from the school. Click on the button below if you’re with us: