How much do the animal torture devices used in laboratories cost? PETA did the math—and we’ll show you how to help animals suffering in experiments!

The National Institutes of Health spends much of its annual budget on pointless and cruel experiments on animals. About $18 billion in taxpayer money—each year—goes toward tormenting sentient beings in laboratories.

Along with the pseudoscientists who torment animals for a living, there are industries that design, produce, and sell laboratory torture devices. The experimenters get their grants (courtesy of taxpayers), and the companies that make restraint devices, cages, isolation chambers, and the like laugh all the way to the bank. All of them are out for a buck, while animals suffer and die.

Companies that make these animal torture devices charge a fortune for them.

It’s an entire multibillion-dollar industry with a financial interest in making sure experiments on monkeys and other animals never end.

To show how your tax dollars are actually spent, PETA has put price tags on some of the animal torture devices used by notorious monkey experimenters, such as Elisabeth Murray. This equipment can also be found at the seven National Primate Research Centers around the country, which are also taxpayer-funded facilities.

Your tax dollars are used to buy animal torture devices like the eight listed below:

This is one of Murray’s most-used devices. As its name implies, it keeps a monkey separate from other monkeys, with little room to move and nothing to do or touch that isn’t provided by the experimenter.

These are thick plastic tubes that experimenters thrust up the nostrils and force down into the stomachs of monkeys and other animals to pump them full of chemicals. During PETA’s investigation into scalpel-for-hire Covance, workers handled monkeys so roughly that they routinely gave them bloody noses. The monkeys, like the individual seen in the photo below, were juveniles, but the gavage tubes that Covance—a billion-dollar company—used were intended for adult monkeys, because the company couldn’t be bothered to get tubes of the appropriate size. 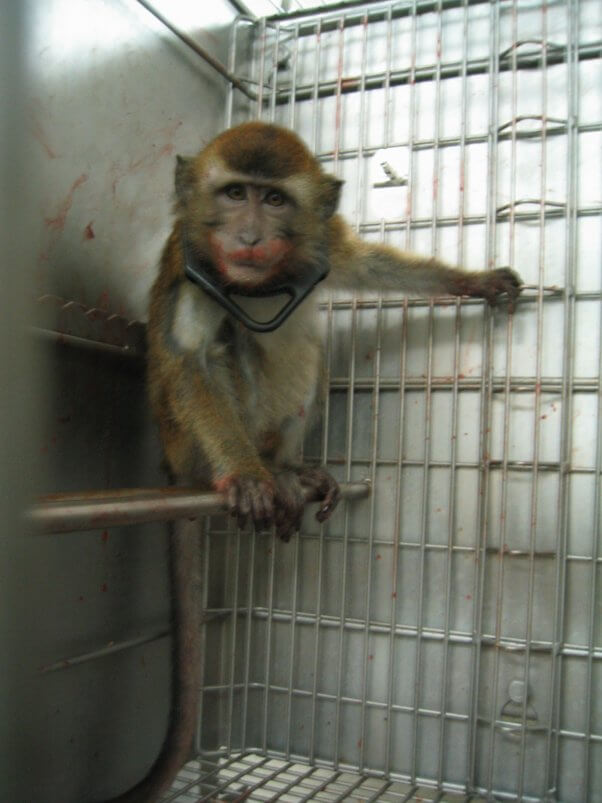 These aluminum cages have guillotine doors on each side. At only 13 inches wide, they barely give a monkey enough room to turn around. They’re used to move monkeys from one place to another.

Taxpayer cost: $1,895 each, which is about $600 more than the average monthly mortgage payment in the U.S.

Experimenters use nursery caging to warehouse infant monkeys who have been ripped away from their mothers. Experimenters often refer to “maternal” and “nursery” rearing, with the latter being an Orwellian euphemism meaning that the infant is being raised without his or her mom.

Just as it sounds, the restraint chair is designed to immobilize monkeys so that experimenters can more easily force their will upon them—often for many hours each day. This device is used in laboratories across the country. 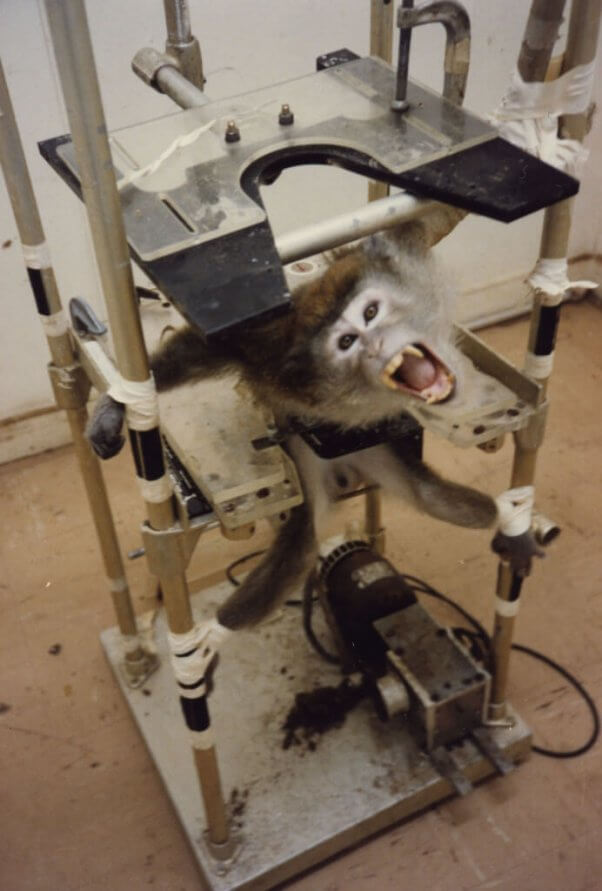 Taxpayer cost: Between $5,200 and $7,000 each, which is in line with the average American’s monthly expenses.

When the restraint chair just isn’t enough, experimenters drill into monkeys’ heads and implant a metal rod that protrudes like a thick antenna. The rod—sometimes called a “head post”—can then be clamped down to prevent the monkey from moving his or her head. 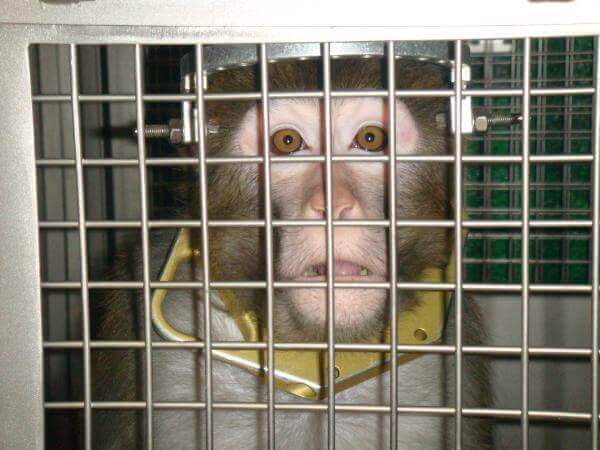 This heavy, rigid metal collar—which some experimenters mockingly call “jewelry”—is placed around a monkey’s neck. The restraint collar can then be locked into a restraint chair, keeping the animal’s head completely still. A long metal pole can be attached to the collar and is used to pluck a monkey out of a cage by the neck while the animal dangles. The monkey is then placed into another device, such a transport cage or an isolation chamber. 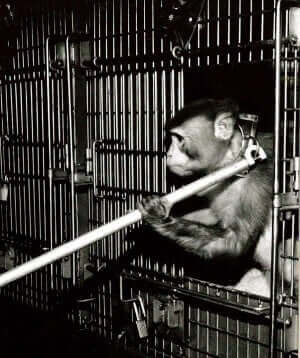 Taxpayer cost: Restraint collars are $95 each, about the same price as a concert ticket. Poles to attach to them are $195 each.

Experimenters often intentionally deprive monkeys of food or water for extended periods of time and then use a raisin or a sip of juice as a bargaining chip to manipulate them into complying with an experiment. These systems dispense only a few drops of liquid in exchange for continued compliance.

What You Can Do for Animals Used in Experiments

Please take a minute to help put a stop to these failed experiments and stem the tide of both blood and money that flows through them: