A mother’s milk belongs to one person only: her baby. That’s the message that new mother and vegan influencer Michelle Weinhofen sends in a brand-new video that PETA has released ahead of Breastfeeding Awareness Week (August 1–7). While breastfeeding her own baby, Weinhofen makes a heartfelt plea for people to support all nursing mothers—including the cows whose calves are taken away from them on cruel dairy farms—by steering clear of dairy “products” and going vegan.

“Many women choose to feed their babies with the milk their body produces, but cows who are exploited for their milk are not given that choice,” she begins in the video. “I would be devastated to have my child taken away from me—I can’t even begin to imagine what that would feel like—but that’s what happens to mother cows on dairy farms.” She goes on to encourage everyone to support the bond between mothers and children of every species by refusing to drink cows’ stolen milk: “Cows make milk for their babies just like I make milk for my baby,” she says. “Go vegan to support all mothers.” 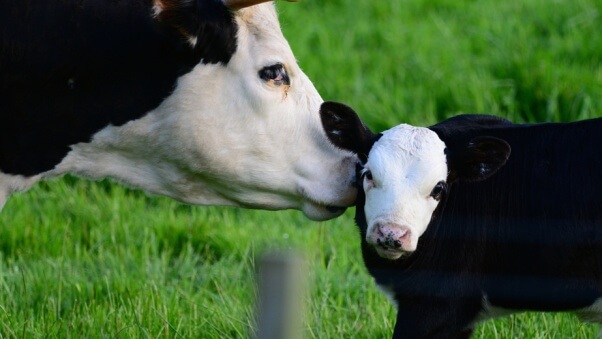 Humans are the only animals who drink the milk of another species and who drink milk beyond infancy. In the dairy industry, cows are repeatedly forcibly inseminated on a device that the dairy industry itself has called a “rape rack.” Their babies are taken away from them shortly after birth so that humans can drink the milk that was meant for the calves, and mother cows have been heard calling for their stolen babies for days after separation. Male calves are often shipped off to be killed for veal, and females face the same fate as their mothers: to be used as milk-producing machines until their bodies give out and they’re slaughtered for cheap meat.

Weinhofen’s video is the latest of PETA’s pro-breastfeeding efforts, which include enlisting PETA pal Pamela Anderson to write to the World Health Organization in opposition to the attempt by the dairy industry–backed U.S. government to derail breastfeeding in developing countries as well as moving to place its Jesus-themed “Breast Is Best” ad at a public pool where two nursing mothers were harassed.

Ready to wean yourself off dairy “products”? Order your free vegan starter kit, which is full of delicious dairy-free recipes.