Are you ready for (cue ominous music) … Snakes on a Train?

No, it’s not the sequel to that (in)famous Samuel L. Jackson film—although it is the title of a straight-to-video rip-off. In this case, it’s a new PETA campaign that is sure to get some attention for reptiles killed for their skins.

What Are Your Hands Holding?

PETA is asking the Massachusetts Bay Transportation Authority (MBTA) for permission to launch its new “Snakes on a Train” campaign on the T, featuring realistic-looking rubber snakes wrapped around subway poles and handles, as well as a slogan on the windows that reads, “Snakes Make Your Skin Crawl? Shed All Scaly Belts and Bags! Watch Video at PETA.org”: 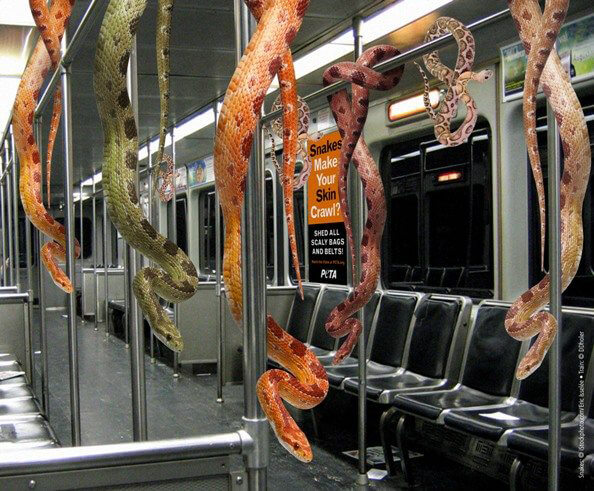 PETA hopes to scare commuters out of their snakeskin boots, shoes, purses, and belts. In order to make snakeskin accessories, these reptiles are nailed to trees or posts and skinned alive. Their mutilated bodies are discarded, and it sometimes takes hours for them to die.

How You Can Help Snakes

If you wouldn’t want to hold on to a snake during your commute, why would you want to have their dead flesh wrapped around your waist, feet, or personal belongings? Let’s shed exotic skins for good.