Apparently, bludgeoning animals in front of children is OK with the Boy Scouts of America (BSA), but being gay is grounds for dismissal. A troop leader who made headlines for butchering bunnies in front of young boys hasn’t gotten so much as a tsk-tsk from the BSA despite a massive outcry from current and former Scouts, but the organization was quick to call for the removal of Scout leader Geoff McGrath of Troop 98 in Seattle after finding out that he’s openly gay. When the church that sponsors the troop refused to fire McGrath, the BSA revoked the troop’s charter. Now, the troop’s 15 Scouts can no longer use logos, uniforms, or names associated with the BSA or attend its camps unless they relocate to another sanctioned troop under different leadership.

To support the troop for standing by its leader, PETA is offering the shunned Scouts the chance to earn our “PETA Pride” merit badge, which sends the message that everyone deserves consideration, regardless of their age, sex, race, disability, sexual orientation—or species. Scouts can earn the badge by pledging to try vegan for 30 days, attending a city hall meeting on an animal rights topic, working to convince neighbors to bring a chained dog indoors, urging school officials to cut out dissection, handing out leaflets or stickers to classmates, staging a small protest outside a circus that uses animals, or undertaking other creative and compassionate actions. 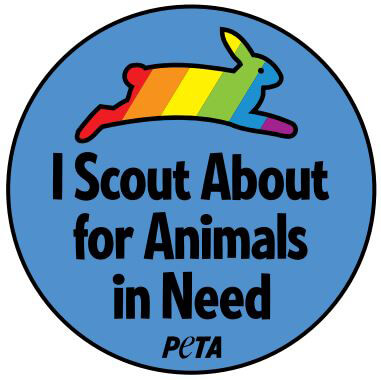 Troop 98’s decision to back its Scoutmaster beautifully embodies one of the organization’s core values—loyalty—and our offer will help the boys in this troop continue to grow into caring adults who extend compassion to all, animals included. If only the BSA would learn the same lesson.