PETA has sent an urgent letter to the board of directors of the American Humane Association (AHA) detailing reported allegations of incidents—some of them fatal—and lack of proper oversight involving animals on more than a dozen recent or current film and television productions purportedly monitored for animal safety by the AHA, as related to PETA by whistleblowers. PETA is asking the AHA to investigate the allegations and, if they prove to be valid, to fix any problems that allowed them to occur. 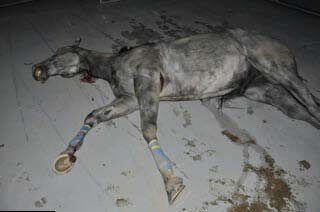 The AHA is the organization—known for its “No Animals Were Harmed” statement seen in film credits—tasked by Hollywood with monitoring the use of animals on TV and film sets. But it is not clear that this statement means what it seems to say. The deaths of horses on the set of HBO’s Luck made it clear that AHA involvement didn’t mean that animals were safe. After PETA took that matter public, the series was canceled—and PETA was contacted with reports about several other productions where animals allegedly died or were injured or put at risk. If the reports are substantiated, some of the problems could have been averted. Some of the assertions allege that AHA’s management ignored problems or even helped set up the filming of sequences that were potentially dangerous for animals.

The productions about which concerns were conveyed to PETA include Moonrise Kingdom, Boardwalk Empire, The Hobbit, Failure to Launch, Abraham Lincoln: Vampire Hunter, The Lone Ranger, and others. PETA was informed that the AHA ratings of some films do not reflect what occurred on set, that “Acceptable” ratings have been given when not all animal action was monitored, and that ratings were changed when the AHA feared information about problems on the set would be leaked. Some of the reported incidents allegedly resulted in injuries to animals and even their deaths.

Whether or not the whistleblowers’ claims are verified or if the AHA institutes reforms, AHA ratings are based only on the short period of time when animals are on the set—they don’t reveal anything about how the animals were trained or the conditions in which they live.

There is no reason to use animals as “actors” when animation, blue screen, computer-generated imagery, and other advanced technologies can produce realistic substitutes. If you see a movie that uses animals in an improper way or portrays animals disrespectfullly, walk out, and tell the theater manager that you’d like a refund and why. For television shows or commercials, express your objections to network representatives or the advertised company.