Horses and people who care about them can rest a little easier tonight. HBO has announced that it is canceling Luck and ceasing all production on the series!

Even before filming on Luck started, PETA contacted David Milch, Michael Mann, and others associated with the production to suggest ways to protect horses, including the use of stock racing footage instead of using live animals. After the first two horses died—and the producers began stonewalling—PETA revealed the deaths publicly and obtained information from whistleblowers as well as necropsy reports from the racing board, which led to the disclosure that older, arthritic horses had been used in dangerous (and deadly) racing sequences and that the horses appeared not to have been provided with adequate protection. Beyond keeping the horses’ plight in the public eye, PETA has also pressed law enforcement to investigate the deaths of the horses used on the set and to bring charges as appropriate.

A huge debt of gratitude is owed to the whistleblowers who refused to let these horses’ deaths go unnoticed. If Milch, Mann, and HBO ever decide to start the series up again, PETA will again be calling on them to use stock footage, rather than putting horses’ lives at risk.

Just one day after PETA sent a complaint to Los Angeles law enforcement urging the agency to investigate the deaths of two horses during the filming of the first season of HBO’s Luck, we have learned that another horse has died on the set. Insiders at Santa Anita Race Track, where the racing scenes are filmed, called us early Tuesday and tipped us off. Now HBO has confirmed it.

But don’t expect HBO or executive producers David Milch and Michael Mann to come clean about who the horse was and what condition he was in. They refused to tell us anything about the first two horses, so with the help of caring whistleblowers, we unearthed the disturbing evidence ourselves: One horse was drugged, and the other was arthritic and hadn’t raced in years. Neither one should have been anywhere near a racetrack. 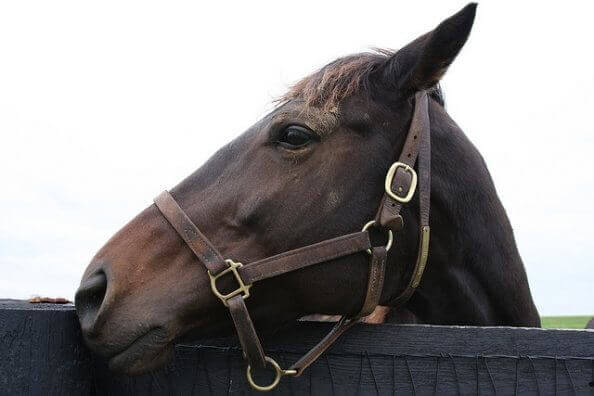 Both were retired racehorses who wouldn’t understand that when they went through the starting gate on a racetrack, it was just for a TV show and not a real race. Outlaw Yodeler was a 5-year-old thoroughbred who hadn’t raced in months and was apparently so sore that he was given a potent cocktail of muscle relaxant and anti-inflammatory and painkilling drugs, including Butorphanol, a painkiller so strong that it’s often used as an analgesic for horses undergoing some kinds of surgery. The other horse, whose name we believe is Marc’s Shadow, was 8 years old and arthritic and had not raced in nearly four years.

Both horses were “raced” twice in one day—something even fit thoroughbreds would never be subjected to. Healthy racehorses need at least a week to recover from the stress of competition. Indeed, they aren’t even exercised twice in one day. Both horses on the set of Luck broke down after the second run. Their leg fractures were so violent that their bones shattered under the pressure. We think—and we hope law enforcement agrees—that the way in which the horses were treated by the production company, the trainer, and the veterinarian warrants a swift and thorough investigation before yet another horse dies.

Human affection for horses unfortunately makes them popular subjects for the film industry. Horses may grab our attention, but these animals are not willing participants in the entertainment industry.