“They saved the driver right away [but] what about the animals?”

That was part of the caption accompanying this disturbing video, posted on Facebook by a reported witness to a cattle truck crash. In the footage, a struggling, obviously injured cow is dangled unceremoniously over a dump truck. The witness cries out in protest at the moment the animal is dropped.

I’m cryingThis is the wreck on the freeway There are still little cows’ legs dangling out of the semi… They saved the driver right away what about the animals???

The truck was reportedly speeding when it crashed on the “Applesauce Corner” in Riverdale, Utah, an on-ramp intersection notorious for truck crashes. Approximately 70 cows died in the crash.

PETA is asking county officials to investigate this incident and file charges as warranted. Alarmingly, county officials have informed us that they don’t currently know the dumped cow’s whereabouts.

While this video is horrific, it’s just a small glimpse into the cattle industry. Cows are often beaten or shocked to get them to cram into slaughterhouse-bound trucks, and they are frequently deprived of food and water for the entire journey, which may take days and occur in all weather extremes, from freezing cold to scorching heat. At the slaughterhouse, a steel bolt is shot into the animals’ skulls, they are strung up by one leg, and their throats are slit. 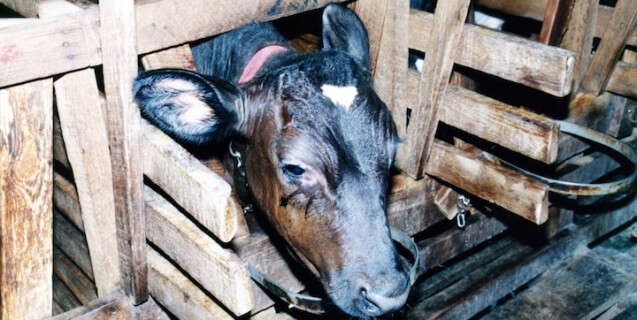 Cows are intelligent, social animals who don’t want to suffer to end up on our plates.

Anyone moved by this video can help these animals by going vegan. Pledge to go vegan and start saving animals today. Order a free vegan starter kit to get started with tips and delicious recipes.