Even as Africa’s elephant population dwindles, countries including the U.S., China, Mexico, and Cuba are still buying baby elephants who were captured in the wild, taken away from their mothers and herds, and sold into a lifetime of deprivation in roadside zoos and for elephant-ride attractions.

Reportedly, on the same day last week that China banned the sale of ivory amidst global celebration, the country was quietly ushering in 31 baby elephants who had been captured in Zimbabwe. A whistleblower shot video footage of one of them being captured in August by the Zimbabwe Parks and Wildlife Management Authority in the Hwange National Park and sent it to reporters.

During a typical capture, wildlife officials fly over a herd in helicopters, spot a young elephant, and shoot him or her with tranquilizers. As the baby falls, the other elephants rush to help, so the helicopter dive-bombs them to drive them away. Kidnappers on the ground drag the baby onto a trailer and take the animal to a holding area, where he or she will wait with other captured babies until being sold.

The eyewitness video shows the captors kicking a baby in the head—and this is just the beginning of the abuse she will suffer as a prisoner in the animal-entertainment industry.

In nature, elephants travel up to 30 miles a day with their herds. In captivity, they’re relegated to tiny enclosures. The babies are tied down and beaten with bullhooks and other instruments designed to inflict pain until their spirits are broken and they’re willing to obey their “trainers” in order to avoid punishment. They’re routinely denied adequate space, food, water, and needed veterinary care, and they often suffer from debilitating health problems. Most die prematurely. 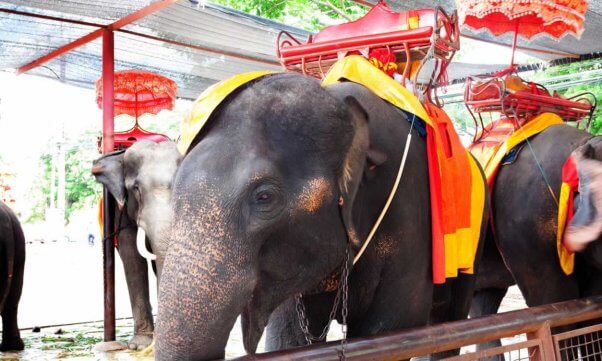 Elephant captivity will end when people stop buying tickets to attractions that use them. Please, don’t give zoos, circuses, or elephant-ride attractions your financial support. And tell travel companies that are still offering excursions involving captive elephants to get out of the cruelty business.