Ahead of the release of She Said, a film about Harvey Weinstein’s sexual assault allegations—and as the disgraced movie producer’s criminal trial enters its fourth week—PETA is placing a sky-high message near Los Angeles International Airport, pointing out that being violated without consent isn’t just a human problem. In these remarkable times when women are rising up against sexual abuse and exploitation, we’re asking everyone to go vegan in solidarity with females of other species who are routinely sexually abused and exploited in the food industry. 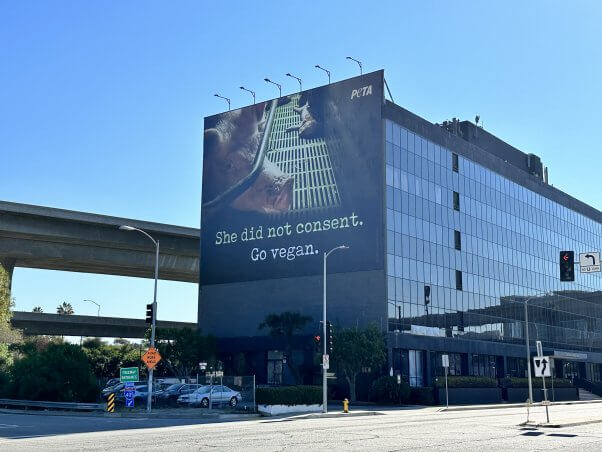 Raising and killing animals for food depends on the exploitation of female bodies, including nursing mother pigs locked in farrowing stalls who are unable to care for their sick or dying piglets (as our billboard depicts), mother cows restrained in devices that dairy industry insiders have called “rape racks,” and hens treated like egg-laying machines and slaughtered when their reproductive systems give out.

She Did Not Consent: Animal-Derived Products Are the Result of Assault

Farmers exploit the female reproductive system to maintain a steady stream of victims who are slaughtered and whose body parts are packaged for supermarket shelves. Anyone who’s upset about the sexual abuse of women should be equally incensed about the sexual abuse of females who may not be human but who also have a reproductive system and are as capable of experiencing fear and pain as humans.

Female cows produce milk only when they’re pregnant or nursing. They make milk for the same reason human women do: to feed their babies. Cows who are imprisoned on dairy farms are forcibly impregnated through artificial insemination again and again on what farmers themselves have called rape racks—all to create milk, cheese, and other dairy products.

Go Vegan to Support Females of All Species

The meat, egg, and dairy industries are built on the subjugation and exploitation of female animals, something that no one should support. We can all feel pain and fear and experience love and joy. We’re all the same in all the ways that matter most.

No one needs to eat meat, eggs, or dairy in order to be healthy—and there are loads of delicious vegan ice creams, cheeses, and milks to try. All of us can help end this abuse by choosing to follow a vegan lifestyle. Go vegan—for mothers, for sisters, for daughters, and for all females whose bodies are exploited.