Vice News is exposing a new depth to the physical and psychological abuse of cows on dairy farms.

Its exposé details that cows on dairy farms are being implanted with the embryos of so-called “elite” animals and repeatedly forced to bear their offspring. It says, “It’s like a bovine spin-off of The Handmaid’s Tale.”

As if it’s not bad enough that cows are forcibly impregnated and their calves are stolen from them, this new technology enables the abuse to go one step further by forcing cows who aren’t deemed to be from pure enough breeds to carry other cows’ embryos.

“It’s like a bovine spin-off of The Handmaid’s Tale.”—Vice News

Meanwhile, cows who are considered “elite” are given hormones to force their bodies to release more eggs. They’re artificially inseminated with semen from “elite” bulls, and when embryos form, dairy farmers scrape them out and implant them in the “handmaid” cows.

People watching Hulu’s The Handmaid’s Tale know that the disturbing images of kidnapping, imprisonment, rape, and torture linger long after the credits have rolled. Humans and cows may have many differences, but there are two things that we definitely share: our ability to suffer and a strong emotional bond with our children.

As Vice News documents, these sensitive cows are sexually exploited in order to maximize profit. An “elite” cow is selected based on a scoring system that ranks her according to how much milk she can produce, how fertile she is, and what her life expectancy is. Breeders can sell one of them to an animal-agriculture operation for hundreds of thousands of dollars, and the buyer can then have her impregnated, scrape out her embryos, implant them into “lesser” cows, and start the process again immediately. 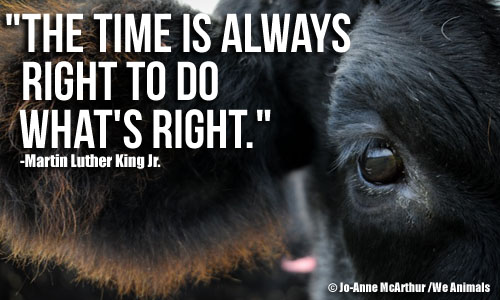 It’s unsettling to listen to one breeder of elite cows and recognize the similarity of his words to The Handmaid’s Tale: “This is how fast I would look at ’em. Like, OK, no, no, nope, nope. … It won’t be a future donor, like this one is a recipient. She’ll carry an embryo, a hundred percent.”

With a swipe of his finger, her fate is sealed. She’ll spend years of laboring to produce baby after baby after baby for the industry, until her body wears out and she is slaughtered.