In just three months, 180 sea lions and seals off the coast of Canada have lost their lives because they had the audacity to eat fish that farmers wanted to kill themselves. Many were shot by Canadian fish farmers, who are allowed to shoot animals who try to scoop a fish or two out of massive ocean-based aquafarms. The rest died from drowning when they became entangled in the aquafarms’ nets. We don’t even have a guess as to how many birds were killed for daring to try to take a fish. 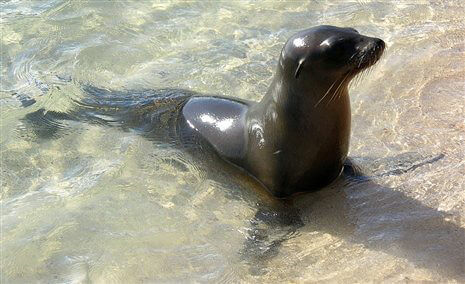 The human taste for fish has exhausted the oceans to the point that 90 percent of large fish populations have been exterminated in the past 50 years. Fish farms only exacerbate the problem because it takes several pounds of wild-caught fish (used for feed) to produce 1 pound of farmed fish. Fewer fish in the ocean means fewer fish for seals and sea lions to eat, so is it any wonder that they are attracted to fish farm “all-you-can-eat buffets”?

Our neighbors to the north aren’t the only ones who want to keep all the fish for themselves. A bill in Congress would allow the U.S. National Marine Fisheries Service to shoot any sea lion caught eating endangered salmon from the Columbia River. Ironically, humans, who are the ones responsible for dwindling salmon numbers, can continue to eat all the salmon they want.

The real solution to the depletion of salmon populations is considerably less violent: Stop eating fish. And ask your representatives not to support any legislation that promotes killing sea lions.