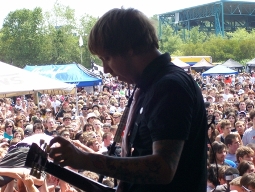 Casey Calvert, the guitarist for Hawthorne Heights, was found dead in his tour bus on Friday, apparently from a case of acute asthma. In addition to being a kickass guitarist, Casey was a great friend to PETA and to animals, and his loss is very deeply felt in our office today. Some of my colleagues in peta2, who knew him best, have written tributes to Casey which you can read below. We will always remember his kindness, his enthusiasm, and his unwavering commitment to making the world a better place.

I have been on many tours with Casey over the last couple of years. Casey was one of the nicest people I have met in all my years on the road. I used to give him a hard time about leaving a venue before he needed to be on stage to go watch ‘A Nightmare before Christmas’ or some other similar type movie. He was always so nice to everyone he met, and willing to take the time to say hello to his fans. He also cared about animals and was always willing to be a voice for them. I really do not know what to say, but Casey will be deeply missed. My heart goes out to his family and band mates. –Jason Bayless

I met Casey on Warped Tour this past summer. Although he generally steered clear of the spotlight, he was always willing work with peta2 to be a voice for animals. Every encounter I had with Casey, he would always tell me that he was willing to do whatever for the animals, and to let him know about any upcoming projects with peta2. He will truly be missed. –Lara Sanders

If I would have randomly met Casey on the street, I would have had no idea that he was a professional rock star. He was so shy and sweet. I remember one time running into him at the local mall when Hawthorne Heights was in town. He was all by himself, and we asked him what he was up to. He said that he had just finished playing, and he had dashed out right away to make it in time to see the brand new Harry Potter movie- and to this day, I don’t think I have ever seen anyone more excited to watch a Harry Potter film. Casey was a sweetheart and will be remembered forever. -Mylie Thompson

Casey was always interested in updates to peta2 campaigns over the years, tried to make it a point to stop by our booth at festivals and tours just to say hello, and was one of the most consistent supporters of all that we do to help animals. He’s inspired many Street Teamers to get more active for animals and has helped to educate thousands of music fans about cruelty to animals for campaigns such as the one we have against KFC. –Pulin Modi

I remember Casey coming to our table at Warped Tour signing the petition, asking about the shirts, and looking at the stickers and leaflets. He actually stopped by the table a couple of times during Hawthorne Heights’ time on Warped Tour and said hello and what not. Really one of the nicest band members that I have spoken with. –Cody Ammerman

At Bamboozle, I gave Casey a vegan chocolate chip cookie bar made by the lovely people at Trustkill Records. Casey got the biggest grin on his face I’ve ever seen. It was absolutely adorable! –Nicole Nuss

Casey was one of the sweetest people I’ve ever worked with at peta2- so down to earth and friendly. He was a true friend of the animals, and will be missed by many. –Violet Owens