Floyd was purchased from a California breeder, and like so many of the purebreds sold as mere “inventory” by puppy mills and other animal peddlers, the bulldog puppy’s health suffered because the breeder focused on the bottom line rather than proper care. 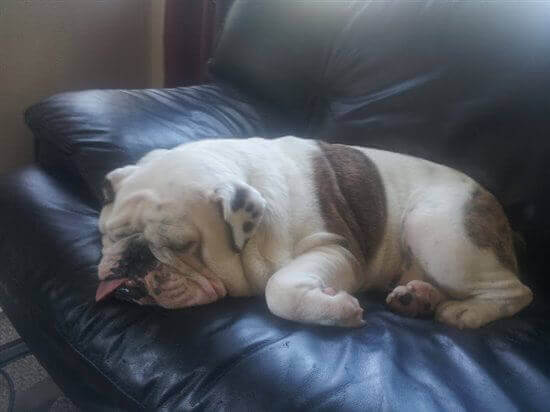 So Young, So Much Suffering

By mating related dogs, breeders are essentially inbreeders, leading to a host of hereditary defects —it’s estimated that one in four purebred dogs suffers from serious congenital health problems. After two veterinarians diagnosed Floyd with congenital kidney disease, his guardian urged the breeder to stop breeding the puppy’s parents and notify the other people who had bought puppies from the same litter. The breeder callously dismissed her concerns, so she contacted officials with the American Kennel Club, but they merely suggested that she give the breeder a bad review online.

By the time PETA learned of Floyd’s condition, the puppy was desperately ill, vomiting, lethargic, and barely able to eat or drink. Since he suffered from other health problems as well, a veterinarian determined that Floyd was a poor candidate for a transplant, the only treatment for his disease.

PETA’s caseworker explained to Floyd’s guardian that breeders frequently sell sick dogs and that the law often protects breeders more than the animals and their guardians. Floyd’s guardian made the difficult but merciful decision to prevent Floyd from enduring further misery by having him euthanized.

There is no such thing as a responsible breeder. Aside from the health problems that purebred dogs have, each dog and cat bred and sold by a breeder takes a home away from another animal waiting to be adopted at an animal shelter. Please don’t contribute to the animal overpopulation crisis by buying animals from pet shops or breeders—always adopt from a reputable animal shelter or rescue.