Update: The Oregon Zoo has replaced its director and top veterinarian after a newspaper exposé revealed that the zoo had entered into an agreement to hand over Rose-Tu’s baby, Lily, to the notorious Have Trunk Will Travel (HTWT), which has been caught on tape beating elephants. However, thanks to public outrage, the transaction never took place, and the zoo instead arranged to purchase Lily and her father, Tusko, who was on loan from HTWT.

Hopefully, the zoo’s new management will learn from past mistakes and never do business with this notorious elephant exploiter again. It should also make good on its promise to create an offsite preserve for the elephants or, better yet, shut down the exhibit and send the elephants to a sanctuary. 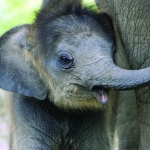 As if being beaten and sodomized at 5 years old weren’t enough to endure, Rose-Tu, an elephant at the Oregon Zoo, is facing her second forced pregnancy.

The Oregon Zoo paid a $10,000 federal fine after authorities found that this youngster had sustained 176 gashes and cuts after being repeatedly struck with a bullhook—a heavy baton with a sharp metal hook on the end—that was also used to sodomize her. It’s little wonder that Rose-Tu’s first forced pregnancy resulted in the chaining of the confused and frightened mother after she kicked her newborn.

Traumatic, costly elephant-breeding programs are indefensible. The mortality rate for babies is high, and no baby who manages to survive will ever be released into the wild. If Rose-Tu’s pregnancy is successful, her baby may eventually be shipped to Have Trunk Will Travel, an outfit caught on tape abusing elephants, including a baby.

Remember: The way that you can make the most difference for animals like Rose-Tu is by never buying a ticket to the zoo.