It sounds like a belated April Fool’s joke, and maybe it is, but scientists in Japan have reportedly found a way to create “meat” from human feces. You might assume that it would taste pretty, well, crappy, but word is it “tastes like beef.”

I know what you’re thinking: “Someone actually ate it?!” But when you think about it, people who eat meat are already eating poop, at least according to 60 Minutes, which referred to the bath chicken carcasses are dunked in before processing as “fecal soup.” 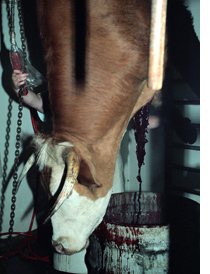 And while eating excrement is gross, eating a decaying carcass is pretty gross, too.

Japanese scientists point out that poop burgers can help allay cruelty concerns and reduce waste and emissions. So I’m not totally poo-pooing the idea. However, why eat, ahem, crap when we already have a plethora of tasty mock meats to choose from, not to mention a veritable cornucopia of fruits, veggies, grains, and legumes?