These days, awareness of plastic waste in our oceans is at an all-time high. All over social media, well-intentioned campaigns are taking aim at things like single-use plastic straws, which have been shown to pose a risk to aquatic animals like sea turtles. But if you care about keeping animals in the ocean safe, don’t just look to your drinking straw—look to your dinner plate. In fact, eating fish does way more harm to our oceans than sipping your soda through a straw ever will. 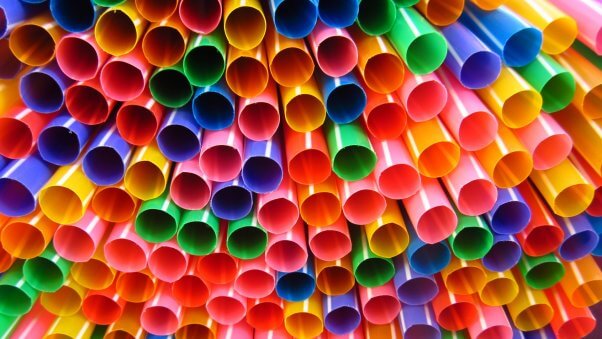 A recent Bloomberg article notes that even if all the plastic straws on our coastlines today were washed into our oceans overnight, they would account for less than 1 percent of the plastic waste that’s estimated to enter marine ecosystems annually. Single-use plastics such as bags, straws, and other pieces of litter do cause pollution—no doubt—but it’s actually abandoned fishing gear that one recent report named “the most harmful form of marine debris for animals.” This abandoned equipment—also known as “ghost gear”—kills and mutilates millions of sea animals every year.

The photos are heartbreaking More than 700,000 TONS of fishing gear is left in the ocean each year. It’s KILLING & MUTILATING millions of sea animals. https://t.co/5S2vO8MEEC

In the Pacific Ocean off the West Coast of the U.S., a floating patch of garbage twice the size of France and weighing roughly 88,000 tons epitomizes a global problem. While this enormous area, like our oceans at large, is full of plastic, the bulk of that weight isn’t coming from straws. Scientists estimate that 46 percent of the mass of the garbage patch comes from fishing nets alone. And other types of fishing gear account for much of the remaining weight. So while many people are stocking up on cloth shopping bags and signing petitions to ban single-use plastic straws in efforts to help, those who fish (or eat fish) need to reexamine themselves, too. It’s simple: Less fishing means less fishing gear—abandoned or otherwise.

You Can’t Eat Fish and Call Yourself an Environmentalist

Today’s commercial fishers use enormous nets called trawlers along with electronic equipment and satellite communications to track fish. These huge nets, sometimes miles long, stretch across the ocean, swallowing up everything and everyone, including turtles, sea birds, and dolphins. “Nontarget” animals like these make up 40 percent of the total global fish catch, and the nets further devastate delicate ecosystems already in danger from the effects of climate change.

Smithsonian magazine reported that between 10 and 100 billion farmed fish are killed globally every year, and another 1 to 3 trillion fish are caught in the wild. According to the UN Food and Agriculture Organization, 35 percent of fish caught in the ocean never even make it to a plate.

Today, the number of fish killed in a given year exceeds the total number of humans who have ever existed.

Even if every single used plastic item were pulled from our oceans, marine species would still suffer on a huge scale as a result of people eating fish. Commercial fish farms are growing so rapidly that half of fish killed for food are now spending most of their lives crowded into filthy tanks or pens where infection and parasites run rampant. By 2030, it’s estimated that nearly two-thirds of fish slaughtered for food will live and die at these filthy, disease-ridden farms.

Seek vegan! No fish wants to die for someone else’s dinner It’s also worth mentioning that toxins are present in both wild and farmed fish: https://t.co/beT2zhXHpT

Fish used in aquaculture are often deprived of food for days or even weeks leading up to slaughter in order to reduce waste contamination of the water during transport. Some fish are killed without being stunned—their bodies are slit open, and they’re left to bleed to death. Others are killed by simply draining water from the tanks that hold them, causing the animals to suffocate slowly.

We Can All Do Our Part to Help Ocean Animals

Sure, we can all help reduce plastic pollution by making simple adjustments, such as using reusable shopping bags, avoiding plastic straws, and always throwing garbage away in designated areas. Click here to discover a few more simple things that you can do to help keep animals safe from litter. But if we really want to help save these animals and prevent further suffering, we need to practice environmentally friendly behavior every single day. That means refusing to support the fishing industry, which is horrifically cruel to animals and hazardous to the environment.