After British Columbia authorities did not recommend filing cruelty charges following PETA’s release of video footage showing severely injured and lame pigs suffering in dungeon-like conditions at Excelsior Hog Farm, PETA has placed ads on local buses that show a pig’s face next to the words “I’m ME, Not MEAT. See the Individual. Go Vegan.” 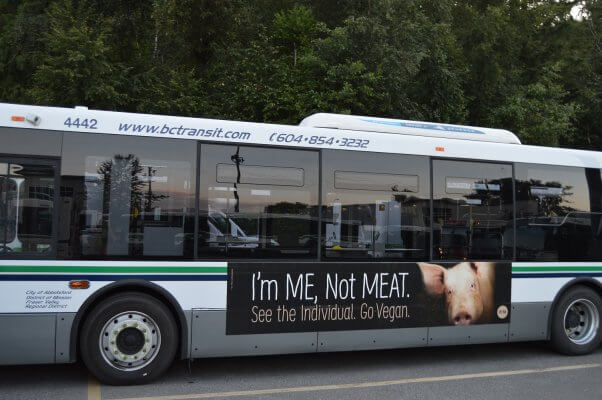 “Piglets at Excelsior Hog Farm were left to die, and their bodies were left to rot right alongside their siblings, just out of their mothers’ reach,” says PETA Executive Vice President Tracy Reiman. “PETA’s ads will circle Abbotsford to remind everyone that the best way to prevent abuse like this is to keep pigs and all other animals off our plates.”

Pigs at Excelsior Hog Farm—which is owned in part by Ray Binnendyk, a director of the BC Pork Producers Association—had sustained bloody lacerations, and some suffered from volleyball-size umbilical hernias. Sows were forced to give birth in farrowing crates barely bigger than their bodies, and while they could nurse, they couldn’t otherwise tend to their babies during the first weeks of their lives, causing many to die unattended.

A sign at the entrance to the farm identifies it as supplying Johnston’s, a pig slaughterer that claims to have “high standards of animal care.” And PETA has seen similar “high standards” at every farm and slaughterhouse we’ve ever visited. We can’t sit by and wait for other people to stop abusing and killing animals. We can end it ourselves, three times every day.