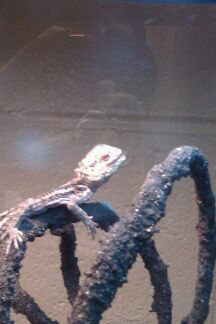 According to a whistleblower, two bearded dragons languished in the back room of a Chicago-area PetSmart store for six months, apparently suffering from improperly treated eye infections that spread to their jaws and caused their faces to rot away.

After pressure from PETA, the store’s manager finally took the bearded dragons to a veterinarian who put them out of their misery, but untold numbers of other animals are likely languishing in PetSmart stores and its suppliers’ warehouses across the country. PETA’s undercover investigations have shown time after time that this kind of cruelty is business as usual for PetSmart and its suppliers.

PETA revealed horrors at Rainbow World Exotics, one of PetSmart’s main animal suppliers, including throwing live animals into the trash, crude neuter surgeries performed in a dark and filthy room by a layperson, depriving animals of desperately needed veterinary care, and leaving them to cannibalize each other, suffer, and die alone in their cages.

At Sun Pet, another PetSmart supplier, an employee—who has since been fired—placed hamsters in a bag and bashed it against a table in an attempt to kill them. Other animals who couldn’t be sold were gassed in a crude, filth-encrusted tank.

Animals at the now-defunct U.S. Global Exotics, Inc., which supplied exotic animals to PetSmart, were crammed into severely crowded and filthy containers, including soda bottles and milk jugs, litter pans, cattle-feeding troughs, and barren wire cages. Hundreds of animals were denied basic necessities, such as food, water, and veterinary care.

And PETA’s undercover investigation of a PetSmart store in Manchester, Connecticut, documented that more than 100 animals—including hamsters, rats, lizards, chinchillas, and birds—were deprived of adequate veterinary care and just left to die slowly, hidden from customers’ sight. PetSmart boasted that this store had an “outstanding pet care team” and an “exceptional pet care record.” Pathetic.

Please show PetSmart that you haven’t forgotten about the animals who suffer unseen. Boycott PetSmart, and tell company officials that you won’t set foot in their stores until live animals are no longer part of the inventory.