Good news out of New York: Following September’s flood in which nearly 100 animals died when they were left to drown, PETCO has announced that its Johnson City store will not sell any animals upon reopening this month. The announcement is music to the ears of Johnson City residents, dozens of whom joined a PETA-led demonstration last September aimed at keeping PETCO from reopening. 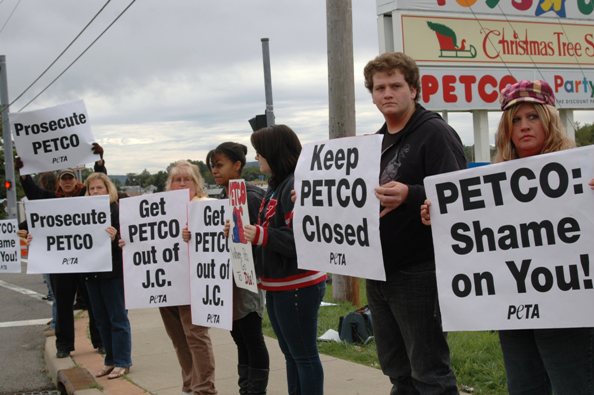 This decision will save many animals from being bred and warehoused to supply the store, which seems appropriate considering all those terrified animals who perished in the dark, cold waters. But PETCO still doesn’t deserve our business until it does the right thing and stops selling animals in all its stores nationwide, given the neglect and cruelty that occur at those locations and that are rife within the chain’s animal suppliers, in addition to the fact that the animal-homelessness crisis—which PETCO itself cites at its dog and cat adoption events—affects the very species the chain sells, too.

Kudos to Johnson City for forging such progress for animals in the pet trade from the devastation that struck there. And remember, folks—there’s still a criminal investigation pending concerning the events leading up to those animals’ horrible deaths …

How You Can Help Animals in Pet Stores

Please buy supplies for your companions only from retailers that do not sell animals.