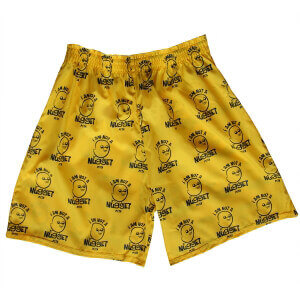 It’s not every day that PETA sends underwear to elected officials. But a pair of bright-yellow “I Am Not a Nugget” boxer shorts are on their way to Winnipeg Centre MP Pat Martin. Martin recently garnered attention for blaming cheap, uncomfortably tight underwear for his departure during a House of Commons vote. Our gift, which includes a vegan starter kit, playfully notes that vegan meals are a great way to stay comfy in slim-fitting clothing.

According to the Dietitians of Canada (and everyone else who studies this stuff), vegans are far less prone to heart disease, certain types of cancer, Type 2 diabetes, and obesity than meat- and dairy-eaters are. They also save animals from a lifetime of immense suffering: Chickens raised for food have parts of their sensitive beaks cut off with hot blades when they’re only days old, and they and other animals spend their lives on filthy farms before they’re sent wide-eyed to the slaughterhouse, where their throats are slit.

Don’t get your knickers in a bunch: Start improving your health and saving animals by ordering your free vegan starter kit today.