A “code red for humanity”—that’s what we’re facing if humans don’t take immediate action toward widespread reductions in greenhouse-gas emissions, according to a recent climate change report issued by the United Nations’ (U.N.) Intergovernmental Panel on Climate Change. So PETA Honorary Director Pamela Anderson is jumping into action again—this time to save the planet. Today, the star teamed up with PETA to distribute 10,000 Methane Offset Starter Kits to cities where climate change–fueled wildfires are blazing, urging everyone to take personal action now. 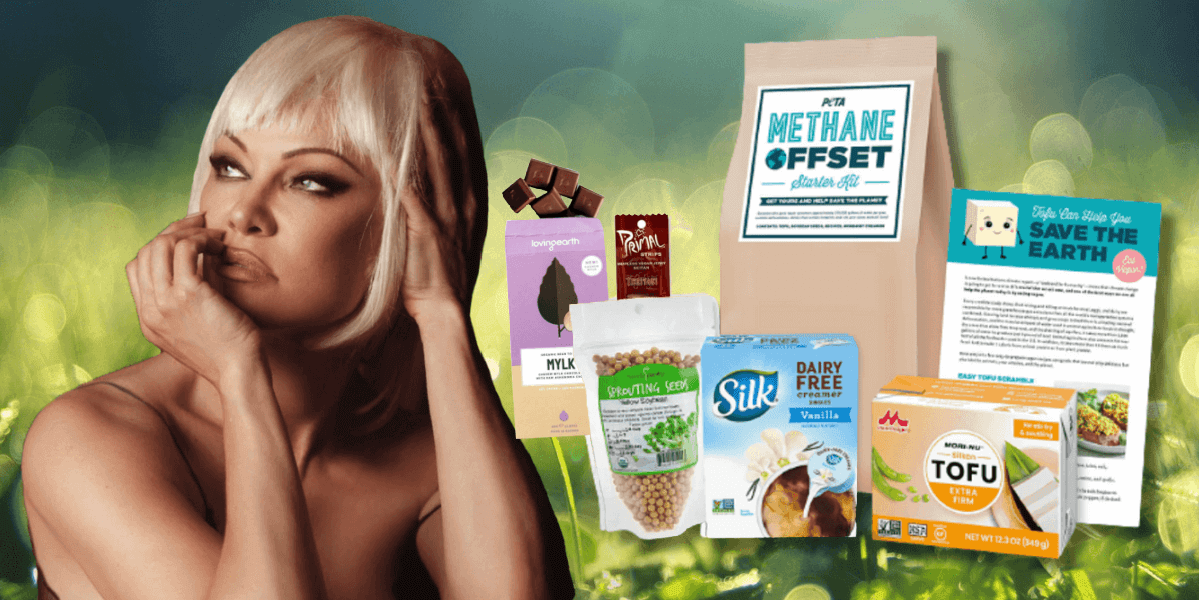 Because the panel has identified animal-based agriculture as a leading cause of greenhouse-gas emissions, the shelf-stable kits contain a block of tofu, seeds to grow soybeans (100 calories of which have 13 grams more protein than 100 calories of beef), nondairy creamer, dark chocolate, vegan jerky, recipes, and PETA’s vegan starter kit—enough to start anyone on the road to environmentally positive living and healthy, humane eating. PETA is sending kits to cities that are expected to face increased flooding, hotter days, more rain, and more floods as well as to cities that are experiencing more wildfires.

These environmentally friendly necessities don’t come from the exploitation of mother cows, who are separated from their babies for dairy; chickens, who are tightly packed into dark, filthy sheds with no room to roam for eggs and meat; or others exploited by the animal agriculture industry.

The panel has also reported that a global shift to vegan eating is required to combat the worst effects of climate change, with animal agriculture alone responsible for up to nearly one-fifth of all human-induced greenhouse-gas emissions. Clearing land to raise animals and grow crops to feed them is a leading cause of deforestation, including in the Amazon, and animal agriculture uses a massive amount of water, contributing to droughts and the spread of wildfires.

The push against climate change starts with us—and we need to act now. You can join PETA’s work to help animals and the planet by going vegan today: