Animal advocates have been joining PETA in protests across North America to speak up for animals and expose the industries that are abusing them. Here are just a handful of the places we went in March and some ways you can take action for animals right now.

As Iditarod mushers drove their exhausted, sick dogs across the finish line in Nome, Alaska, PETA was there. 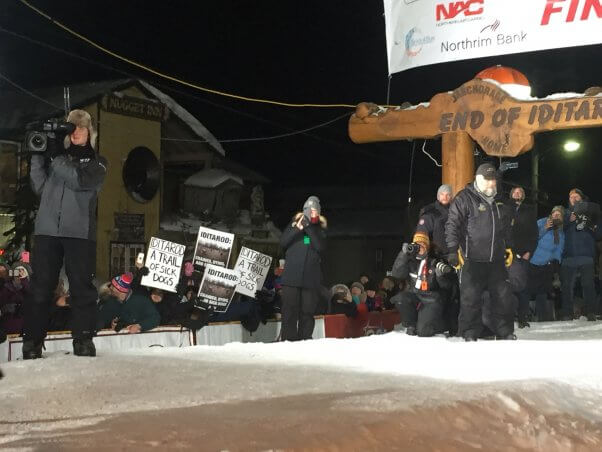 State Farm, Wells Fargo, and others have dropped their Iditarod sponsorships as a result of PETA’s campaign. Tell companies that are still sponsoring the death race that you won’t buy while dogs die.

When Jordan World Circus went  to Prineville, Oregon, a group of animal rights campaigners showed it that it wasn’t welcome. After learning about the cruelty inherent in such shows, many people turned their cars around and left. 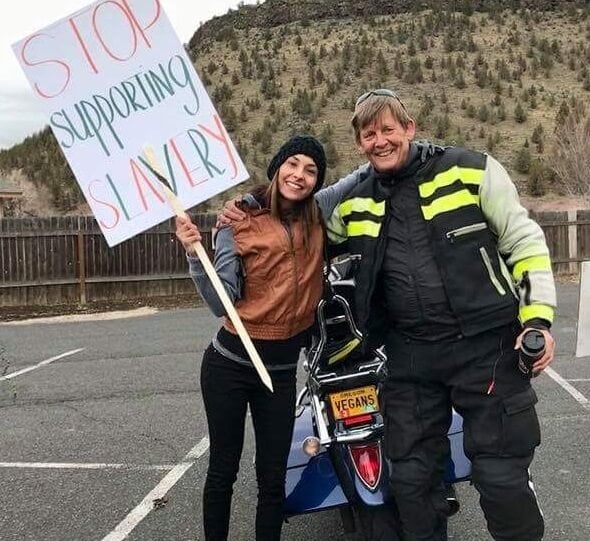 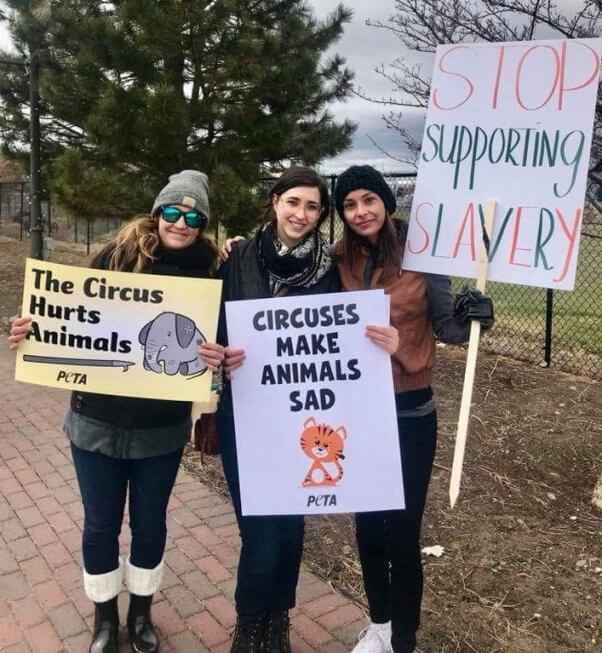 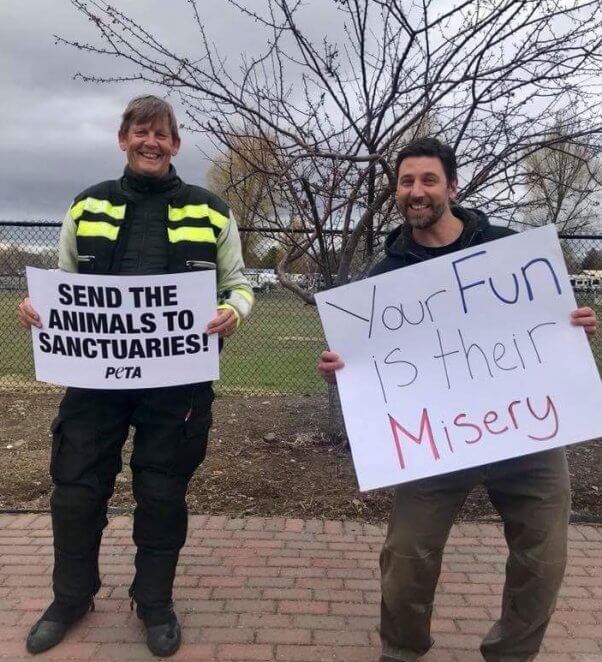 Tell venues planning to host the circus to insist on animal-free performances.

PETA’s tiger traveled to Miami and Tampa, Florida, to tell UniverSoul Circus that there’s nothing soulful about animal abuse. 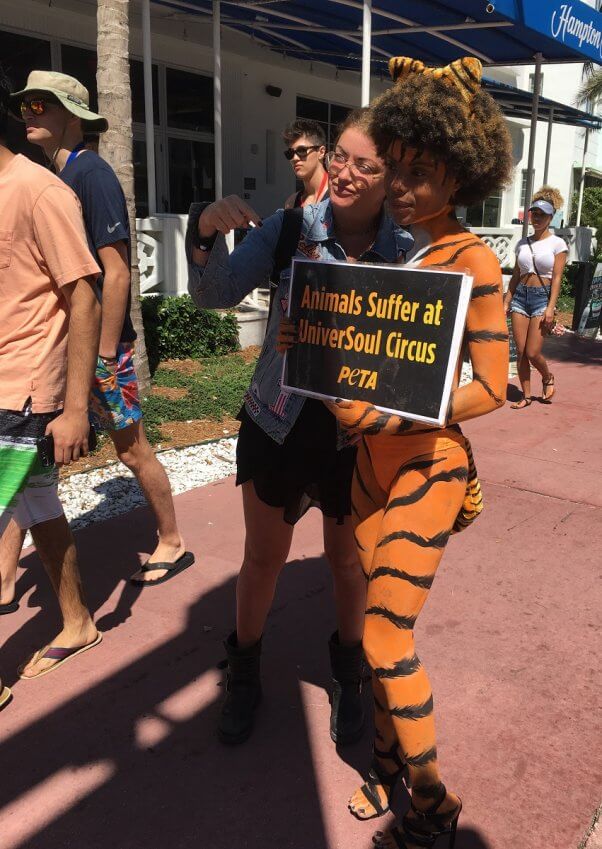 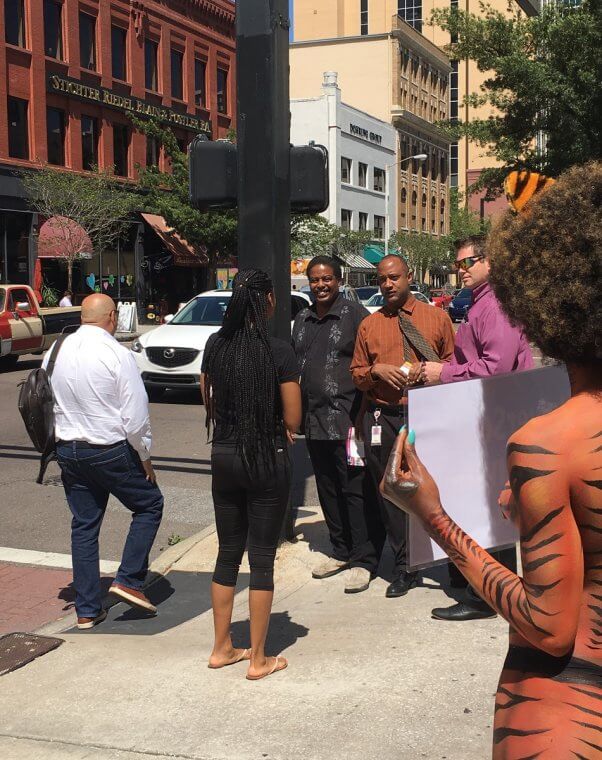 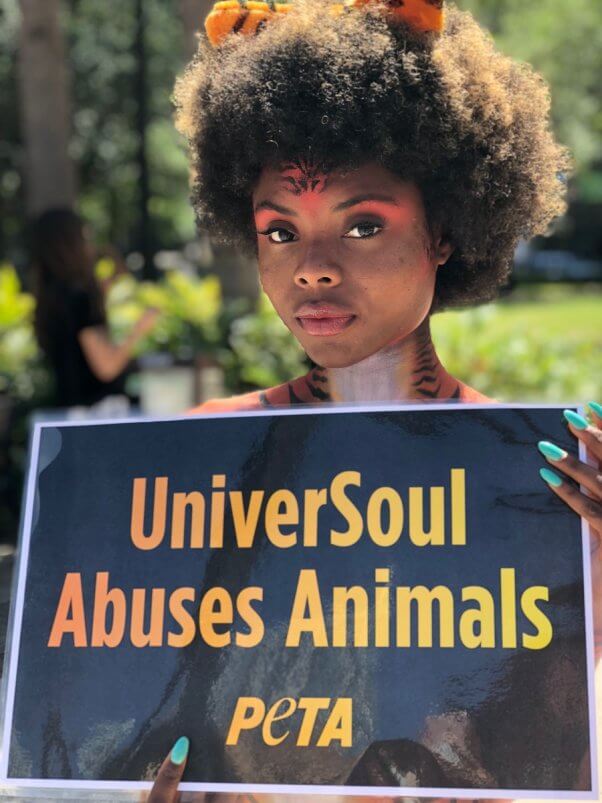 You can, too. Help us run the circus out of town. 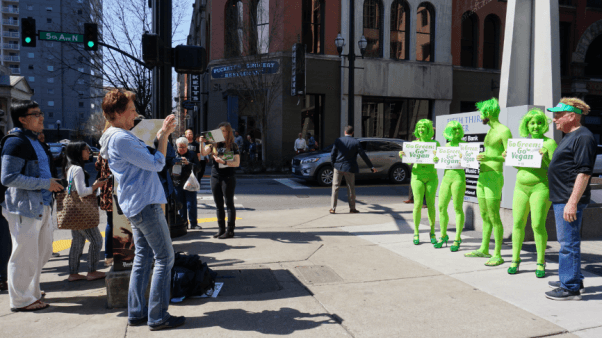 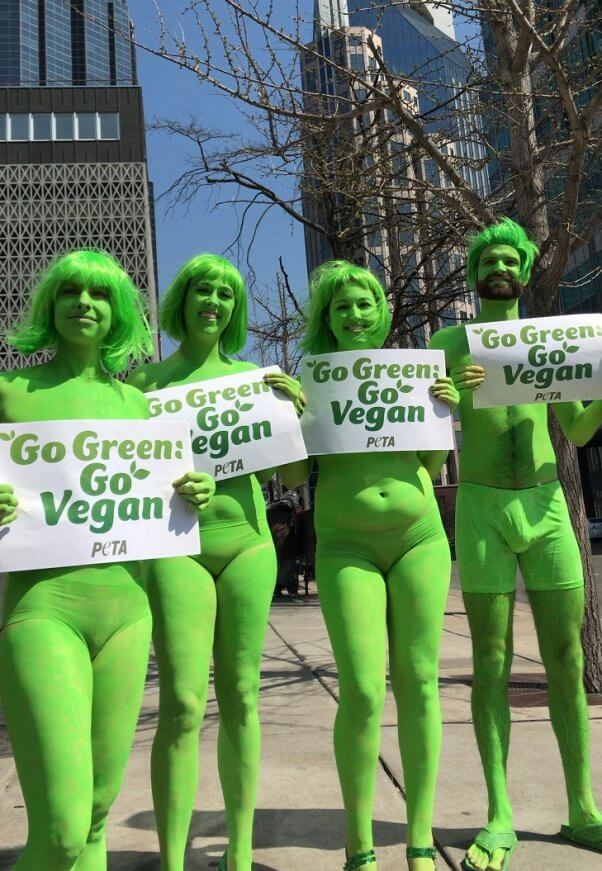 The group handed out a ton of vegan starter kits to help eco-friendly residents truly go green—and you can, too.

Texas A&M University (TAMU) still hasn’t shut down its abusive dog laboratory, so a throng of PETA supporters gathered at the Staples Center in Los Angeles in order to tell NCAA Tournament fans all about the March Sadness. 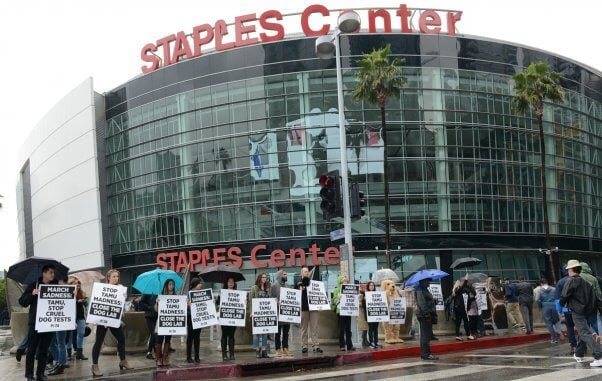 The team lost—and the school is losing supporters, too. Tell TAMU that we won’t stop until it stops tormenting dogs.

On World Water Day, PETA’s cows, chickens, and pigs had a water fight outside the Vancouver Art Gallery to show how wasteful raising animals for food really is. To offset their water use, PETA staffers volunteered to skip their showers—but there’s no way to offset the massive water waste on factory farms. 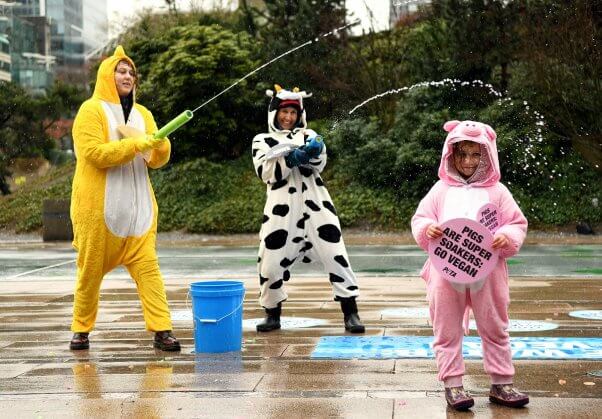 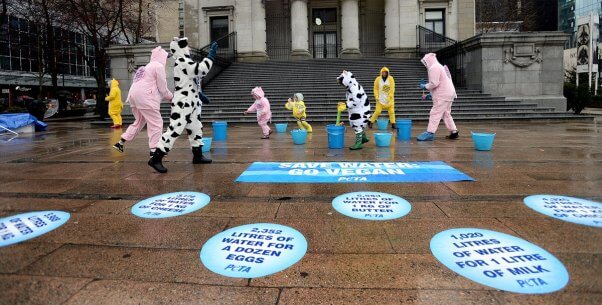 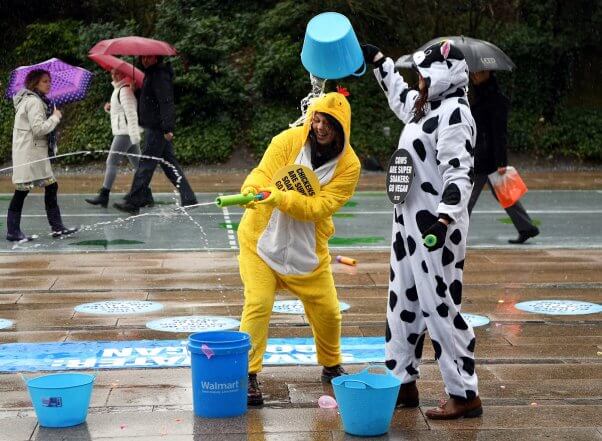 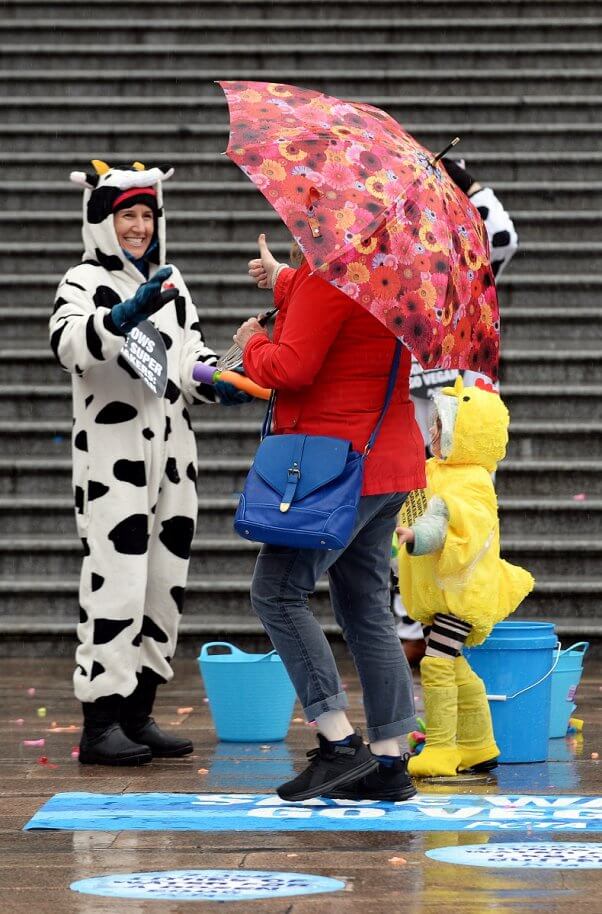 See more shocking statistics about the enormous damage that animal agriculture does in “10 Things the Meat and Dairy Industries Do to Our Water—and Hide,” and pass it on.

As Americans took to the streets for the March for Our Lives events, PETA members were at marches across the nation showing their support for gun-violence victims of all species and demanding an end to this bloodshed. 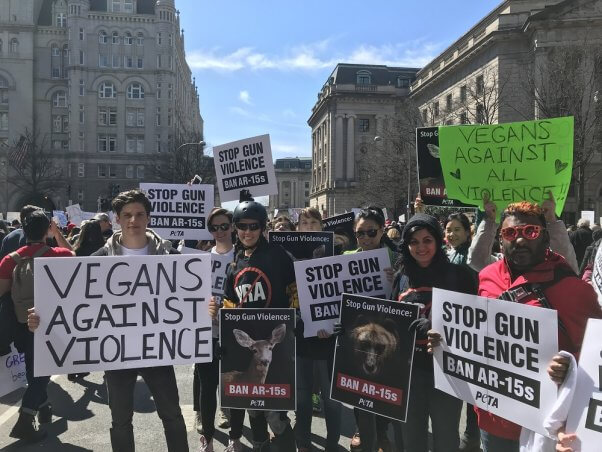 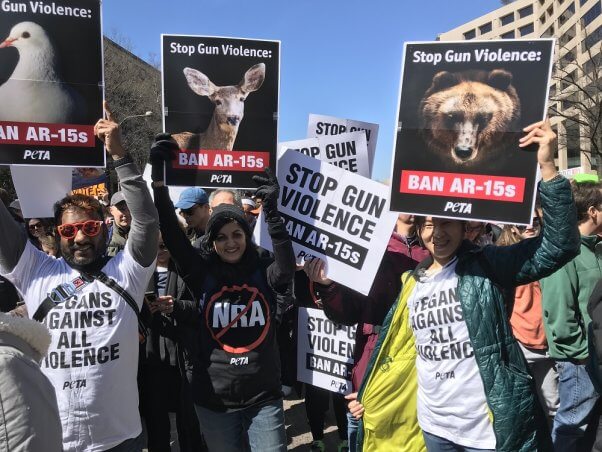 UPS, Say No to Gun Violence