As a show of support for the National Aquarium’s recent groundbreaking decision—the first by a marine park—to transfer the dolphins confined to its tanks to a seaside sanctuary, PETA has sent a $10,000 donation. And we’re celebrating this victory for animals with the help of a costumed “dolphin”: 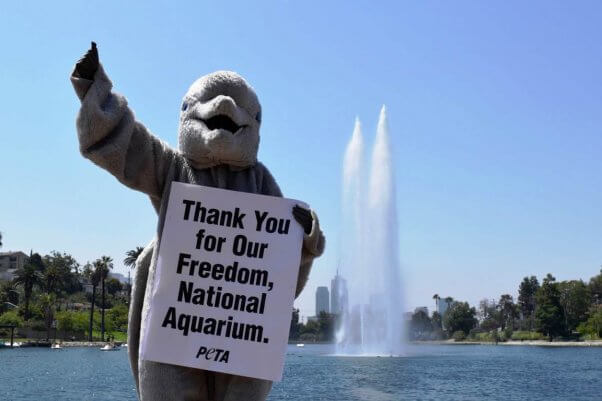 “PETA is pleased to support the National Aquarium’s move to end the confinement of these intelligent and sensitive marine animals,” says PETA President Ingrid Newkirk. “This landmark decision sets a tremendous precedent and will give these dolphins the chance to feel ocean currents, hear wild dolphins’ calls, and enjoy a taste of freedom.”

Dolphins who are freed from captivity can thrive in the wild. An Indo-Pacific bottlenose dolphin named Chunsam was illegally captured between 2009 and 2010 but was released in 2013. Since then, researchers have spotted Chunsam in the wild thriving with her newborn baby in the open ocean.

CEO John Racanelli explained the National Aquarium’s decision in a recent op-ed, writing, “[D]olphins do indeed thrive when they can form social groups, have opportunities to express natural behaviors and live in a habitat as similar as possible to that for which nature so superbly designed them.” He also pointed to the new experiences that the dolphins will be able to have in the sanctuary—“[t]hey have never before felt the rain on their dorsal fins, chased a mullet along a mangrove shore or teased a startled crab.”

He also stated the following:

Although this decision is about a group of dolphins, it is every bit as much about our humanity; for the way a society treats the animals with whom it shares this planet speaks volumes about us.

In the wild, marine mammals share intricate social relationships, work cooperatively to find food, and traverse up to 100 miles of ocean every day—all types of behavior that are thwarted in tanks.