In a monumental decision announced on Tuesday, the National Aquarium in Baltimore, Maryland, said that it’s moving forward with its plans to send the eight bottlenose dolphins there to a sanctuary.

This means that the pod of six females and two males—one of whom was captured in the wild in 1972 and another born at SeaWorld Orlando—will be transferred together to a safe oceanside habitat, where they’ll be able to feel the ocean’s currents, interact acoustically with wild dolphins, and enjoy some semblance of a natural life. 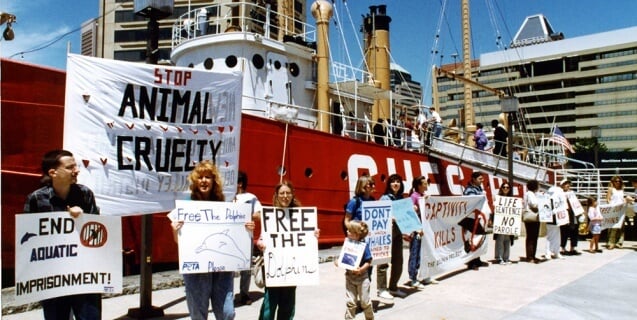 PETA protesters lead a demonstration at the National Aquarium in the 1990s.

In 2014, the aquarium announced that it would explore the feasibility of moving the dolphins to a sanctuary, saying, “Times have changed, and our understanding of the needs of the animals in our care has changed. A lot of very valid research has been done in the last 20 years to open our eyes to the cognitive and social behavior of dolphins.

This decision shows SeaWorld, the Miami Seaquarium, and all other marine parks that confining dolphins to concrete tanks can and should end. Dolphins are cognitively and emotionally complex animals who, in the wild, swim many miles each day. In a tiny, barren aquarium tank, these sensitive beings may develop ulcers, engage in self-destructive behavior, or even attempt suicide. 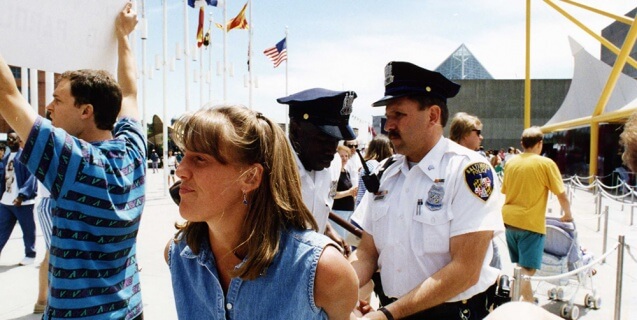 PETA’s now–executive vice president, Tracy Reiman, is arrested at a protest at the National Aquarium in 1994.

For decades, PETA has argued against dolphin captivity at the National Aquarium. In 1991, we launched a campaign against its then-new dolphin facility, and in 1994, our now–executive vice president was arrested at the aquarium during a protest.

Never visit any marine park, and demand that SeaWorld retire the marine mammals in its tanks to safe, seaside sanctuaries.